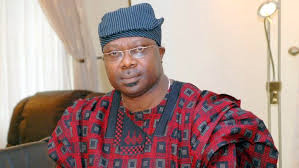 Aregbesola, the immediate governor of the state is believed to be at loggerheads with his successor, Gboyega Oyetola. The latter has hand in Omisore’s defection from the Peoples Democratic Party, PDP, to the All Progressives Congress, APC, much to the displeasure of the interior minister.

The former governor used the occasion of his revalidation of his APC membership at Ilesa to equivocally take a swipe at the Omisore.

In a video of him, Aregbosola in reference to Omisore who was once indicted on killing late Power minister, Bola Ige called him a killer.

His word, “Killers have joined our party and the law guiding our party doesn’t say we can’t admit them when a law court has not convicted them. You know the killers or you don’t know them?

“Are you happy that Bola Ige was killed? I am a son to the late Bola Ige. Whoever denigrates Bola Ige is our enemy. Whoever wants to use Bola Ige’s tomb to climb to a higher height would not achieve his aim. When we want to aspire for a position here, your name and antecedent will determine how you will be treated.”