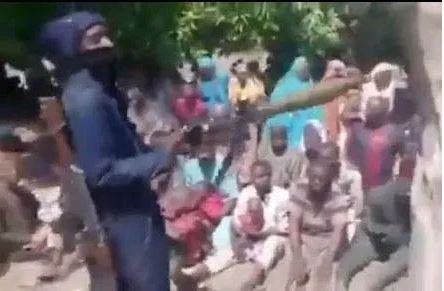 Kagara: No Contact With Abductors Of Students, Others — Source Makes Shocking Claim

According to a report by Sunday Vanguard, contrary to reports that contacts had been established with the kidnappers of students and workers of Government Science College, Kagara, Niger State, the abductors have not been located by state and non-state actors at all.

Niger State governor, Abubakar Sani-Bello, had said consultations were ongoing between government and some bandits for the purpose of releasing the abductees.

He added that negotiations were at the final stage.

This was sequel to a visit to some bandits in the state by Sheik Ahmad Gummi and some government officials.

But a source who was among those who visited the bandits told Sunday Vanguard that those who had a meeting with Gummi and Niger State officials were not the abductors of the Kagara students and workers.

The source said the bandits only promised to assist in identifying the kidnappers, who belonged to another group of bandits terrorising the state.

According to the source, “No direct contact has been established with the abductors of the Kagara students. We visited the bandits in the forests, but those people Nigerians saw on television are not responsible for the Kagara incident.

“They were kidnapped by another group and they have all been taken inside the forest. The bandits only promised to assist in locating them and establishing contacts with those responsible’’.

The only thing is that those school children and their abductors have not been traced by either the security agents or the bandit leaders that were available for the reported discussion with Sheikh and government delegation.

“The other abducted group of women that were kidnapped while traveling in a luxury bus is believed to have been taken deep inside the dense forest.

“The gang holding them are said to refuse engagement with mediators that include the visiting Sheikh and sympathetic bandit leaders within the same forest.

“The position that the school children would soon be rescued is based largely on the hope that the cooperative bandits’ heads would first be able to locate them and if they are able to convince the captors. It could be a long wait perhaps longer than Kankara.”

Last Wednesday, no fewer than 42 people, including 27 students, were kidnapped when bandits attacked the school.

Niger Commissioner for Information and Strategy, Muhammad Idris, who made this known, said the whereabouts of three teachers were unknown.

According to him, 12 family members of the teachers were also abducted during the attack.