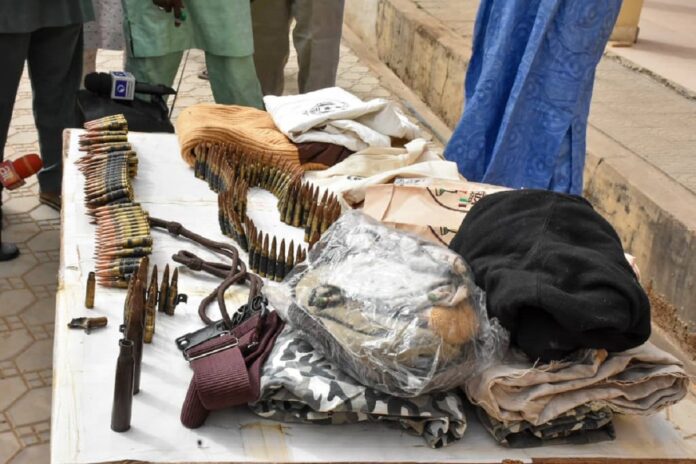 The spokesman of the Police in Bauchi, SP Ahmed Wakili, who paraded the suspects on Thursday at the Command Headquarters, said they include two house agents that were arrested on Sunday, February 14,, 2021 at about 18:00hours at Kofar Dumi area of Bauchi by Police patrol team.

Wakili gave the names of the four suspects as, Muhammed Sanusi; Abba Sa’idu; Yakubu Ahmed and one Sa’idu, all residents of Bauchi.

The police said that the main suspect, who kept the ammunition in the four-bedroom building belonging to one Hafsat Umaru Tela, is a 50-year-old Adamu Suleiman.

Wakili added that Suleiman was a tenant in the building, adding that based on intelligence, Police had kept watch on the building before it was eventually raided to recover the ammunition and other weapons.

He also said that two of the suspects namely; Muhammed Sanusi and Abba Sa’idu, were the agents who brought the main suspect, Adamu Suleiman into the house, adding that the Police are still investigating the issue with a view to getting to the roots of the discovery of the weapons and ammunition, the owners and the purposes for which they were acquired.

However, there was a mild drama at the Police Command headquarters on Thursday during the parade of the suspects, who denied knowing anything about the recovered ammunition, saying that they only saw the weapons in the building contrary to the claim of the Police.

Adamu Suleiman narrated that he rented the building for N75, 000 out of which he deposited the sum of N30, 000.

According to him; “When I went to clean the building to enable me park in, I saw a bag, upon examining it, I discovered that it contained those items. I immediately contacted the local security outfit called ‘Yan Kwamiti’ who came and saw the items, they informed the Police and now I am being held as a suspect”.

Wakil assured that as soon as it is established that those being held in custody have no hand in the recovered ammunition, they will be set free without any delay.

A question that many people asked is that the main owner of the items is yet to be identified while those arrested have denied knowing anything about the items.

Police  indicated that the yet to be identified Nigeria Immigration Officer was a former member of the Multi National Joint Taskforce fighting insurgency in Borno and Yobe States, and he is now serving in Yola Adamawa State.