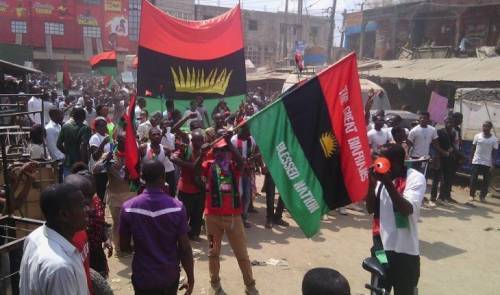 The Nigerian government has been condemned by the Indigenous People of Biafra for recently launching air and land attacks on Orlu community in search of Eastern Security Network operatives.

IPOB described the attacks in the South-East on Thursday as a declaration of war on innocent citizens.

The media and publicity secretary of IPOB, Emma Powerful, said this in a press statement made available to SaharaReporters on Friday.

SaharaReporters had reported attacks by the military on Orlu communities in Imo State, which has worsened the already built-up tension in the areas.

SaharaReporters learnt that the attacks were connected with the military’s resolve to dislodge the Eastern Security Network operatives said to have strongholds in the forests.

The ESN operatives in January had a bloody clash with the Nigerian Army from Obinze barracks, where four soldiers were reportedly killed.

“Nigerian soldiers are currently conducting aerial strikes in our areas. Many innocent lives may be lost. They are probably looking for ESN operatives who are checking the activities of killer Fulani herdsmen,” a community head told SaharaReporters.

“People’s homes and market places may be affected. We don’t need aircraft in Orlu. They should go and find the stolen school pupils in Niger State,” another resident said.

Reacting to the distressing incident, IPOB spokesman said, “We the Indigenous People of Biafra (IPOB) ably led by our great leader, Mazi Nnamdi Kanu, wish to bring to the attention of the whole world, that the Nigeria military has, at last, brought war to Biafra land.

“Supported by other security agencies, including police and the Department of State Services, DSS, they came with military jets, tanks, and heavy war equipment against us. Yes, the second Nigeria/Biafra war has begun! The war began on Thursday, February 18, 2021.

“The wicked Nigeria military has simultaneously launched both land and air attacks on us. After the genocidal war of 1967-1970 in which they killed over 5 million innocent Biafrans, they have come again to bomb the Biafrans under the pretext that they are hunting the gallant personnel of Eastern Security Network (ESN) guarding our forests against killer herdsmen and terrorists on a rampage in our land.”

He also recounted the sad ordeal of how some innocent people were assaulted and arrested by the military men, alleging that they were harbouring ESN and IPOB men.

“Days before the raid, they first abducted harbour synagogue priest, Mazi Egole, and his household, branding them IPOB members. Then on February 16, they abducted Mrs Ngozi Umeadi, who they learnt took care of those injured (persons) during the #EndSARS protest. Not done yet, they took Dr. Stephen Irochi of Multicare Hospital and some injured #EndSARS protesters from Obigbo receiving treatment at the hospital.

“With this, the oppressive government of the dead President Muhammadu Buhari now run by the Fulani cabal has confirmed that it is the chief sponsor of terrorism and banditry going on in our land. The satanic government which could not defend Biafrans against incessant unprovoked attacks against indigenous Nigerians has now mobilised its land and airforce against ESN patriotically and voluntarily doing the job that Nigeria security forces wickedly refused to do. The crime of ESN is defending locals against Fulani herdsmen.

“Orlu and its environs are now a theatre of war declared by the wicked Nigerian government against innocent Biafrans. Scores of innocent civilians have already fallen casualty! Orlu and its neighbouring Orsu LGAs have been under heavy bombardment by the Nigeria Airforce since yesterday, February 18, 2021.

The statement also accused the Governor of Imo State, Hope Uzodinma, of conniving with the Nigerian government and the military to attack people in the region.

“Regrettably, this genocidal war against Biafrans has the endorsement of the Supreme Court Administrator of Imo State, Hope Uzodinma, who the Fulani Janjaweed Government is using in its futile desperation to actualise its Fulanisation agenda. But he, his likes, and their slavemasters will pay heavily for this!

“The world must hold Hope Uzodinma and the Buhari-led Fulani-controlled federal government of Nigeria responsible for the ongoing genocidal war in Orlu and Orsu. The same hypocritical Nigerian military which could not trace or locate heavily-armed bandits and Fulani terrorists in the forests of Zamfara and the other Northern states is now bombing ESN, a mere vigilante group. Miyetti Allah announced its nationwide security outfit and nobody bombed them till today.

“Amotekun was formed in the West and the tanks were not rolled out against them. But now that Biafrans have announced our own vigilante group – ESN to protect our people against terrorists kidnapping, raping, and slaughtering our people in our own ancestral land, all hell is let loose.

“But we promise disgrace to our enemies. They shall be shamefully defeated. The war has begun! We shall defend Biafra and we shall triumph! No inch of Biafra land will be taken by the invaders. We have vowed never to relinquish an inch of Biafra ancestral land to Fulani herdsmen from the Sahel. Their evil Fulanisation agenda shall perish with them. God of the Jews shall defend us against the enemies. This war will be different from the 1967 genocide!”

“We have no choice but to defend our ancestral land. We have complained enough, written petitions but the world turned a blind eye. The media refused to give us the audience. Nobody seems interested in our story but like the Jews, we must look unto our God and courageously fight back like heroes. In the end, Biafra will come,” the statement added.