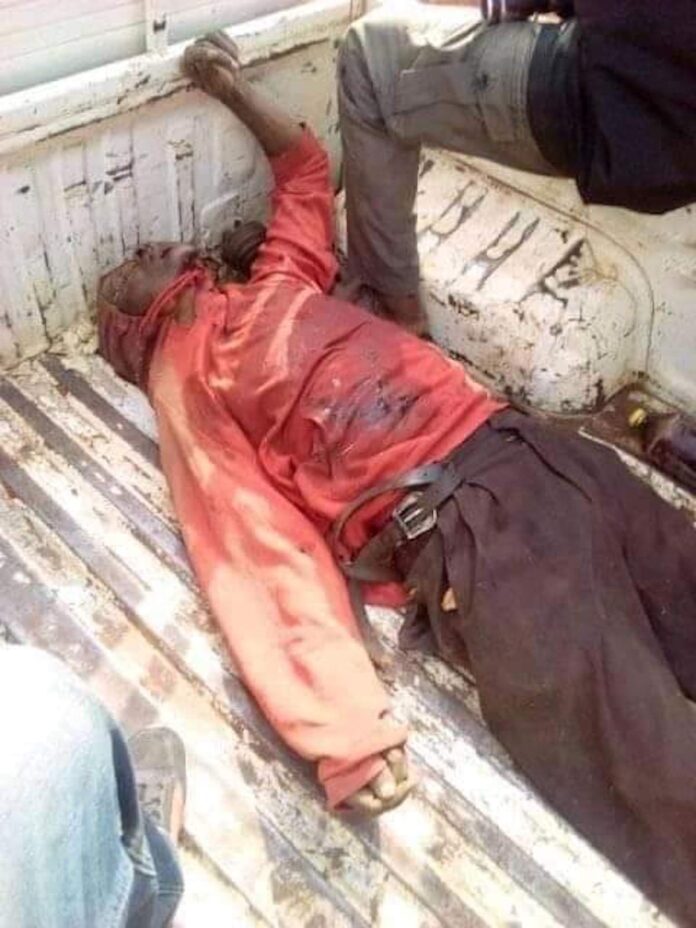 The insecurity in Nigeria may have elevated to a mere storm in a tea cup to a real storm beyond a flash in pan. The ongoing crisis in the south eastern State of Ebonyi may have reached the point of no return. This is judging by new information recently made available to 247ureports by a consortium of sources within Ebonyi State which indicate the crisis has taken a new turn following the weighty discovery made by the army stationed at Effium as they repelled an attack by would-be attackers at a village near Effium called Inikiri Bernard.

Today, February 17, 2021 in the morning at about 6:30am – while repelling an attack on a village by name – Inikiri Bernard – the home of the Chief Justice of Ebonyi State -the military engaged the attackers who had laid ambush against the military. Amidst the exchange of fire, the military dropped on the attackers. The gunned down attacker turned out to be a Fulani youth armed with AK47 and charms.

“Fulani was even among the machineries brought by the Uffiomites to fight Ezzas because one was killed today by soldiers at Inikiri Bernard when they went for an attack.” – lamented a source from the government house.

The bloodletting in Ebonyi State which started January 22, 2021 as mere political clash over control of geographical tuff, quickly morphed into ethnic and/or communal clash between the folks from Effium [Uffiomites] and the Ezza folks – and moved from the urban areas into the rural areas where it is presently wreaking havoc, untold bloodshed, destruction of homes and properties.

“There is a power tussle between the Local govt chairman ( Barr.Odah Clement) and Ohaukwu North state house of Assembly rep.(Awo Chinedu) over who control a garage by their loyalists. So on 22 Jan there was a fight between the two camp which later degenerated to ethnic crisis. The governor came in and restore normalcy in the town by deploying securities and the warriors then move to the rural areas. The villagers were caught unaware because the don’t even know that something is happening. More than 200 souls has been wasted and houses over 1000 burnt to ashes, villages like Agugwu, Ibenda, Akparata,Ugoeze, Agugba, Ebeta, Ameka,no security presence there.” – This is according to eyewitness who spoke to 247ureports from Ebonyi State.

The Governor of Ebonyi, Dave Umahi – in his efforts to quell the crisis – reacted to arrest all the stakeholders in the communities where the clash is said to have occurred. He called for the assistance of the Nigerian military. Between the January 22 and January 25, 2021 – the violent activities were quelled in the urban areas of the Effium environs. A loose fitted peace agreement was reached by the stakeholders. Governor Umahi ordered the community stakeholders to tell their youths to stop all violent activities and allow peace to reign.

Unfortunately, within days of the supposed peace agreement, the bloodletting resumed and worsened.

According to a soldier at the field, the youths of Effium took to the communities dominated by the Ezza people to begin burning of homes, killing of Ezza youths and abduction. On Saturday 13th of February 2021, the village of Ugoeze was attacked at 7am by youths of Effium. They attacked ten [10] compounds, burning thirty five [35] houses, killing two [2] men and abducting two [2] men. Later on the same Saturday, at 7pm, the same youths attacked another village, Azuogbee. At Azuogbee, they were repelled by community youths with the help of military personnel stationed nearby at Effium Urban.

After the Saturday attack, two days later, the Effium youths descended on another village, Agugwu – dominated by Ezza people. The youths, using hired mercenaries from Delta State and Benue State, proceeded to haze down 300 homes. They were armed with automatic weapons, AK47s and the likes. They used handheld sprinklers to pump and sprinkle fuel on the homes and buildings before firing a bullet towards it – to set it on fire. Presently, there are no homes standing inside Agugwu community.

The military source revealed the attacks to be coming out of a community called Akparata – where the chairman of Ohaukwu LGA [Barrister Odah Clement] hails from. The community is dominated by Effium folks. “We noticed they launch their attacks from Akparata into nearby communities and they return to Akparata after the attacks”, explained the officer who lamented that there is no presence of security in the rural areas where the battle has moved to. He pointed to five [5] communities as highly in need of military presence – Ugoeze, Agugwu, Akparata, Ibenda and Uturu.

The soldier explains there exists a running age old fracas between the people of Effium and Ezza. For this reason the people of Effium had long begun preparations for an eventual clash with the Ezza people. They stockpiled weapons and hired mercenaries in preparation for an eventual clash. The January 22, 2021 clash only provided the opportunity. And they have seized on the opportunity to strike – with the absence of military forces on the ground in the rural community.

On their repeat attack on Ugoeze village – two days ago – they were stopped on their tracks as they were seen in the forest preparing to move into the town. The people of Ugoeze who alerted the military men stationed 4km away in Effium were disappointment when the military men failed to show up. The military showed up at another town [Inikiri Bernard] claiming to have made a wrong turn. “The military said they missed their road”.

On the part of the military, the GOC had visited the community at Effium to inspect the carnage first-hand. He acknowledged the limited availability of boots to secure the five communities. “The 82 Division stationed in Enugu is spread thin. We can not send soldiers to rural areas”, said the GOC as he departed from the area leaving behind unarmed vigilante to defend the village. Nonetheless, the Umahi administration expressed appreciation for the military efforts in Ebonyi. “If not for the military, they would have burnt the entire town”.

Commercial activities has since seized in Effium. One of the biggest markets in Ebonyi State is said to be the Effium market were buyers and sellers come from as far as Port Harcourt, Enugu, Benue – to trade. “Now there is no commercial activity. People from Enugu, Port Harcourt are no longer coming”.