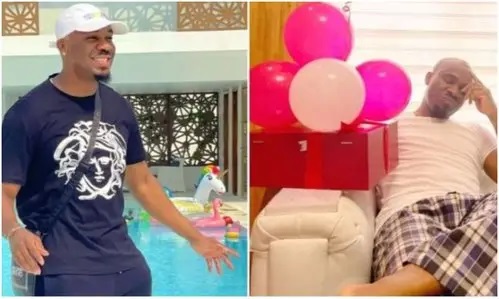 The controversial club owner has been sued after being called out by Eleshin security services limited for allegedly staging a valentine’s gift presentation and making defamatory comments.

He had taken to his page on Instagram to complain bitterly about gifts packages he has been getting from an anonymous individual ahead of the Valentine’s Day celebration.

According to Mr Akeem Fadun, a lawyer who called out the socialite on his Instagram page, he had no problem with the socialite gifting himself in the guise of an anonymous female admirer, named queen but certain line was crossed which cost the delivery man his job.

“We have written a letter to popular Lagos socialite #prettymikeoflagos concerning his defamatory comments about our client, Eleshin Security Services Limited. The staged gift presentation was geared into making our client’s look incompetent by breaching clear security protocol. You can gift yourself a gift and say it’s from the Queen, but there’s a line not to be crossed. The guard concerned has explained what actually transpired on that day which I’ll post shortly. He was reabsorbed after being sacked.”