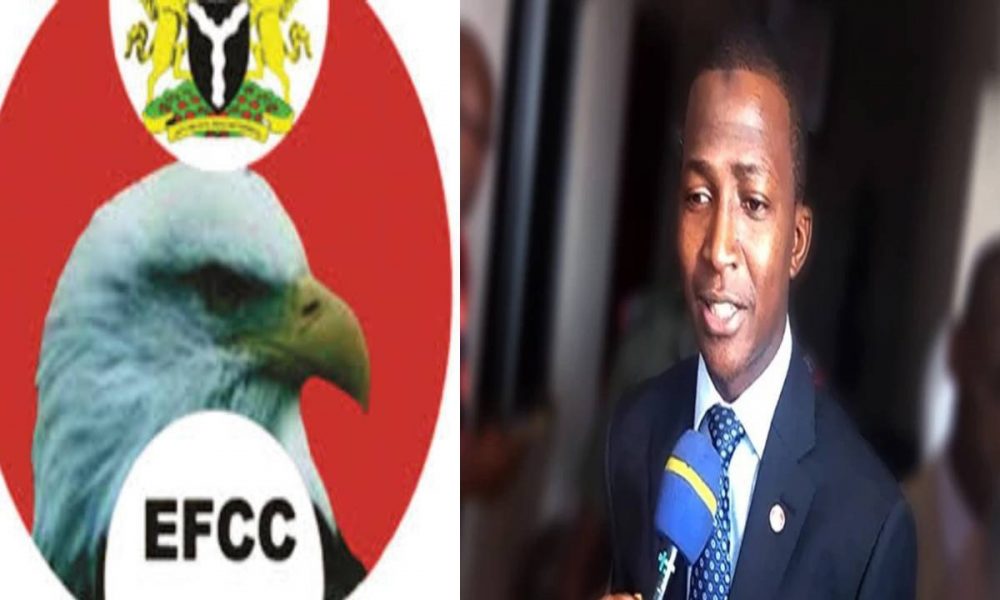 See Reactions Over Appointment Of Bawa As EFCC Chairman

Divergent opinions have trailed the appointment of Abdulrasheed Bawa as the new Chairman of the Economic and Financial Crimes Commission (EFCC) by President Muhammadu Buhari on Tuesday.

The Special Adviser to the President on Media and Publicity, Femi Adesina announced the appointment in a statement.

The statement read: “President Muhammadu Buhari has asked the Senate to confirm Mr Abdulrasheed Bawa as the substantive Chairman of the Economic and Financial Crimes Commission (EFCC).

“In a letter to President of the Senate, Ahmad Ibrahim Lawan, the President said he was acting in accordance with Paragraph 2(3) of Part 1, CAP E1 of EFCC Act 2004.

“Bawa, 40, is a trained EFCC investigator with vast experience in the investigation and prosecution of Advance Fee Fraud cases, official corruption, bank fraud, money laundering, and other economic crimes.

‘’He has undergone several specialized trainings in different parts of the world, and was one of the pioneer EFCC Cadet Officers in 2005.

“Bawa holds a B.Sc degree in Economics, and Masters in International Affairs and Diplomacy.”

With the announcement, Bawa becomes the youngest person and the first non-police officer to head the anti-graft agency since inception.

End of an Era

As stated above, Bawa comes into the leadership of the EFCC as the first chairman, either substantive or active to head the EFCC.

The pioneer chairman, Nuhu Ribadu, who came in as a serving police officer held forth between 2003-2007. He handed over to Ibrahim Lamorde, who acted as chairman in 2008, before Farida Waziri, a retired AIG, was appointed in 2008.

Farida Waziri was, however, sacked in 2011 by former President, Goodluck Jonathan to pave way for the return of Ibrahim Lamorde, who served between 2011 and 2015 when he was sacked by President Muhammadu Buhari to pave way for Ibrahim Magu, who was in the saddle between 2015 and 2020.

Except for Farida Waziri, who was a retired Assistant Inspector General of Police, others were serving police officers, including the acting chairman, Muhammed Umar, who was in the saddle until the appointment of Bawa on Tuesday as chairman.

Of all those who held forth at the EFCC as chairmen, the appointment of Ibrahim Magu was most shrouded in controversy. Starting from the refusal of the Senate to confirm his appointment on two occasions, reportedly based on a damning report on him by the Department of State Services (DSS), Ibrahim made history as the only chairman of the anti-graft agency to have remained in office in acting capacity for five years.

Magu also has the unenviable record of the only chairman of the agency to have been disgraced out of office over allegations of corrupt practices and abuse of office.

Nigerians will recall how he was arrested by DSS officers while leaving the annex office of the EFCC in Abuja and driving to the State House Banquet Hall, which later became the venue of his interrogation by a judicial panel headed by a retired President of the Court of Appeal, Justice Ayo Salami.

Though Nigerians are yet to know the final report of the panel, many are of the opinion that the panel did not find Magu not guilty, especially with his not returning back to office after the conclusion of proceedings by the panel.

Also, the appointment of Bawa by President Muhammadu Buhari is believed to be part of the recommendations of the panel, for the agency to be headed by a professional investigator and not police officers as the practice had been over the years.

The appointment of Abdulrasheed Bawa may, however, run into some hitches or continue to cast a question mark on the integrity of both the agency and the administration of President Buhari, if all the questions hanging on his appointment are not cleared.

An online medium had reported how Bawa was arrested and questioned over the sale of about 244 trucks that were seized by the Port Harcourt zonal office of the EFCC, where he worked then as zonal head.

The report claimed he was arrested and detained by the anti-graft agency in 2019 for selling at least 244 trucks worth between N20-30 million each to his proxies at N100,000 per unit, depriving the country of about N4.8 billion in potential loot recovery.

It was disclosed that the forfeiture proceedings of most of the trucks were yet to be concluded when Bawa allegedly disposed them. This, according to the report made the former EFCC Secretary, Ola Olukoyede to confront the new EFCC boss in 2019, as he was said to have received complaints that Bawa was tampering with assets undergoing forfeiture proceedings.

When asked what happened to the trucks, Bawa reportedly said he was acting on the instructions of Magu but failed to put it in his statement.

Against the expectations of Olukoyede, who had informed Magu, the former EFCC boss was said to have made an urgent trip to Port Harcourt upon his return to Abuja, after which Bawa was ordered to resume at the EFCC Academy in Abuja.

It would be recalled that the ‘disappearance’ of the trucks formed part of the allegations levelled against Magu during his interrogation by the Justice Ayo Salami Panel.

The SMBLF stated this in a statement signed by Yinka Odumakin of the Afenifere, Chief Guy Ikokwu, Senator Bassey Henshaw, and Dr Isuwa Dogo, adding that Bawa was in charge of the Port Harcourt zonal office last year when dozens of petrol trucks confiscated from suspected looters were auctioned off to his proxies at ridiculous prices.

They also noted that Bawa had been recalled to the EFCC training school in Abuja pending the conclusion of investigations into the matter.

The leaders said: “President Muhammadu Buhari has for the second time in six years forwarded another nominee to the Senate for confirmation as the Chairman of EFCC. Anti-corruption is a star programme of the President and a large part of his following is owed to the anti-corruption propaganda on which a lot of Nigerians were sold.

“But walking the talk has been a challenge for the President as his first nominee, Ibrahim Magu, remained unconfirmed in almost five years because of the damning report of the Department of State Services on him which showed he is a man that should be running from anti-graft instead of looters running for him.

“As they are managing to clean up the Magu mess, he has put forward Mr Abdulraheed Bawa as a replacement. But facts coming out about his latest nominee showed that the whole anti-corruption war is a joke that can only impress the unwary.

“The anti-graft agency is said by reports to have asked Abdulrasheed Bawa to lead its field office in Lagos with effect from August 8, despite a probe of his alleged theft of confiscated proceeds of ill-gotten loot at his previous appointment in Port Harcourt.

“Bawa was in charge of the Port Harcourt zonal office last year when dozens of petrol-bearing trucks that were confiscated from suspected looters were abruptly auctioned off to his proxies at ‘ridiculous prices’.

“Three of his junior colleagues who were alarmed by the sheer mismanagement of priced public assets and other suspicious acts of Mr. Bawa took immediate steps to curb his excesses by filing anonymous complaints to the headquarters in Abuja.

“He was said to have been subsequently arrested and detained for several days in Port Harcourt before Magu, erstwhile head of the agency, ordered his transfer to the agency’s training school in Abuja pending the conclusion of investigation.”

The SMBLF also urged President Buhari to investigate the allegations and clear the air.

Despite the allegations hanging on Bawa, a group, Anti-Corruption and Integrity Forum, has applauded President Buhari for appointing him.

The Chairman of the group, Comrade Prince Kpokpogri, while reacting to questions on the new appointment, said it was the best thing to happen to the leadership of the EFCC, adding that Bawa’s 16 years experience on the job will be an added advantage to the Commission.

“Having served and grew under all EFCC past chairpersons, starting with Nuhu Ribadu, who recruited the first set of civilians into EFCC (including Bawa) in 2005, the competence of Bawa is not in doubt.

“Bawa was trained by the FBI, KPMG and many other institutions in the UK, United States and Nigeria. Bawa has led a number of key corruption and financial crimes investigations including the infamous case of former Petroleum Minister, Mrs Diezani Allison-Madueke, the case of former Niger State governor, Muazu Babangida Aliyu and that of the controversial crude oil swap. He was also involved in the investigation of petroleum subsidy fraud (2012-2015).

“Bawa has headed EFCC zonal offices in Ibadan and Port Harcourt between June 2018 and December 2019. From Port Harcourt, Bawa was posted to Abuja as head of Capacity Development Division of the EFCC Academy, Karu.”

He also noted that the new appointee is someone with a listening ear, who will always be ready to consult and carry all the stakeholders along.

“Having interacted and listened to him on several occasions, the new EFCC chair will bring about fresh air at EFCC,” Kpokpogri assured.

What Nigerians are Saying on Social Media

Nigerians on Twitter had expressed their opposition to the appointment of Bawa as the new EFCC chairman.

Below are some of them:

@DanielRegha: “With all due respect, I believe a lot of people are more qualified than Abdulrasheed Bawa to become the next EFCC Lagos branch boss; I see no reason why someone who was arrested & exposed for his criminal act should occupy such an office. The govt should stop playing politics.”

@DigitalQueenn: “A trained EFCC investigator who was also formerly arrested by Magu’s EFCC for Oil Theft to replace Magu as EFCC Chairman. Wait, are you sure Ababakar Shakau’s name won’t be sent to the Senate for confirmation? Just asking.”

@oduhj1: “If there is a Senate for Nigeria, the confirmation will be denied but there is none but a Buhari senate. Sad.”

@ola_olanath: “Must we accept this appointment? Is it only the North that must head the EFCC? Have we all been tied in one place at the mercies of this bad governance? In sane democracies, the citizens have a say. But here, those in power do anything they like without looking back. Things have to change.”

@MichaelBiafra: “Imagine people being selected from ‪@NGRPresident‬ since all this while; 1st it was chief of army staff who was fired for not leading the war against Boko Haram; now someone who is official thief. Nigeria!”

@eebuchi: “My country, my beloved country! A criminal appointed to pursue criminals. Let’s see what the Senate will do.”