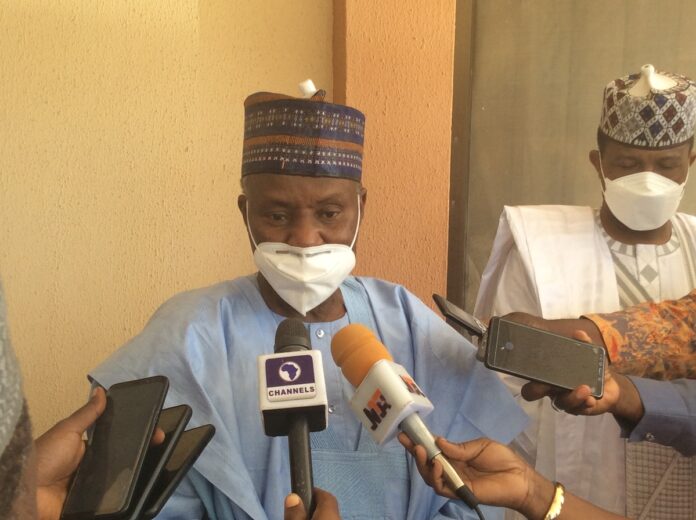 The Minister of Defence,  Major-General  Bashir Salihi Magashi (rtd), has tasked Governors and other political office holders to go back to their localities and fight poverty through creation of employment opportunities as part of measures to stop the issue of banditry and other security issues being experienced in the hinterlands.

The Minister who spoke to selected journalists in Kano on Saturday, shortly after revalidating his All Progressive Congress (APC) membership card at Galandanci Ward, Gwale Local Government Area, Kano, maintained that: “I am the Minister of Defence and the defence of this country is entirely my responsibility. We have the mandate to ensure that the lives and property of people are protected.

“I will also refer you to the promise Mr. President made to Nigerians in 2015, that is, security, economy and corruption. If in the process, the policy has had some people who think that they should be given independence to do what they want to do, in order to  ring this country down, so be it.

“But crying that we should do that or should not do this will not solve the problem.. Let everybody go back to his people. Everybody, I mean, all political office holders should go back to their localilies and see what is happening there. There is poverty, there is neglect, there is no school, no healthcare centres, nothing!

“So, if they can concentrate on that alone, I think the nation will be better of. But, certainly, I admire the Governor’s saying their voices, but we will all analyze it and we will be able to come up with their ideas so that the Federal Government will remain neutral on every issue that will divide this country. We will not  e agents that will divide this country. Certainly, it will not come from President Buhari.”

He also spoke on the ongoing second wave of EndSARS protest going on in  Lekki Tollgate, warning that the Federal Government will not allow unpatriotic elements to destabilise the country under any guise.

The Minister was speaking at a time when over 23 protesters were already arrested at the Lekki Tollgate.

According to him, “there is a basic responsibility of the government and that is to protect every Nigerian—-whoever he is. We always believe that given the necessary intelligence, no agent of government will sit down and fold his hand without doing something.

“This EndSARS issue, if you recall, the Minister of Information has briefed this nation and alerted that something like this is coming;and we know we are always prepared. This is our job—-to ensure internal security.

“We must plan for it. We don’t want to be taken by surprise. And if you want us to  be taking by surprise, then, there is no need to call us protectors. If EndSARS is to take place today (Saturday), we will ensure that we have peaceful counter plans that we will put in place to ensure that mistakes are not made in protecting the people.

“You know the composition of the  EndSARS crowd. Over 60 per cent of them are people who don’t even know why they are there. They just come to take part. Some of them are rogues, some are there to steal. They want to do whatever they think. They actual people are few.

“The genuine ones, we want to get to get them enlightened. They should stop doing things that will create a collateral damags for the country.  We need people who will seat down and use their brain. Sit  down with the government and see what we can do.

“We ask them—- what are your problems. In the initial one, when they said this is their problems, even Mr. President spoke. They gave  5-point demands; and they were attended to. But if some people want the country to  be governed the way they want, we are not elected to serve a particularly people. We were elected to serve this country.

“Whoever is involved in this EndSARS issue, the military and the government will not allow it to   happen. But we will be as good as any other citizen to protect this country.

“We are not going to be harsh on anybody. We will maintain the law and peace to the best of our ability. We can use force when it is required. When you use force, we don’t say you will go and start killing people. We can use minimum force commiserate with what is seen on the ground.  And that is where some people are getting it wrong.

“We can not sit down and then you shot at somebody and we allow you to go because somebdy thinks that you are one that can kill and go away. Please give us time, in this country, we are in a state where we want everybody to look up and see what he can do for this country, not what the country can do for you.

Speaking on the APC membership card revalidation exercise, he said: “Based on the observations of the APC National headquarters, there were lapses in our membership registration and they decided that we revalidate the membership card of our great party.

“The President has also gone to his Ward in Katsina to revalidate his party membership card. APC is the only party that can salvage Nigeria.”

Commenting on the strength of the military in combating insurgency in the North-East,  he stated that: “You see, since 2015, we have been making progress. You remember when we met this country, almost 20 Local Government in the North East were under siege, they were under the Boko Haram. Eventually, we tried and Nigerians appreciated our efforts. But when things were turning, we all remain passive, we don’t want to know anything, but victory.

“To  be honest, the role of the Armed Forces and other security agencies is really very encouraging; and we emplore Nigerians to encourage us to do more.

“But if you are only waiting for success, nobody  can predict anything, especially with the kind of war we are fighting. The new concept of everything is not so conventional as to predict that you can beat the enemy at your own pace.

“The only way a conventional warfare is fought is for to know the strength of your enemy, his weaknesses, and compare with what you have. Then you can certainly predict that you can win the war of not. But the most important thing is the ability of the people that you are fighting for to appreciate the effort that the military is putting in and give them all the encouragement to better.

“But today, everybody seem to rely on successes, not making a corresponding interest to assist the military. But I think Nigerians are getting it better. They know that the military cannot do it alone; and they are doing all their best to see that they assist us in whatever manner—-intellectually,  materially and anything that will make us to get out of this thing, especially, in the intelligence.