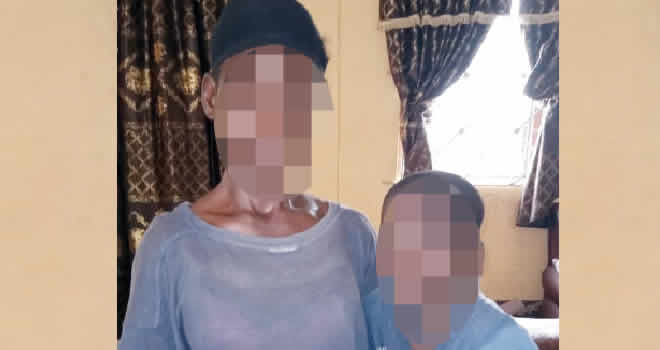 Rashidat Olowoniyi, a 30-year-old woman watched in disbelief as herdsmen attacked and macheted her husband to death while she was peeping through the curtains inside a small hut at a farm settlement located at Oha village in the Imeko- Afon Local Government Area of Ogun State.

Her husband was killed over a disagreement two  months.

Rashidat who was inside the hut with her only child of a 10-year-old marriage could not shout or raise the alarm in order not to attract the attention of the killer herdsmen to herself and son.

On February 8, 2021, Dele Olowoniyi, was reportedly murdered in his sleep. Olowoniyi’s wife was said to have found him dead with machete cuts in his neck and other parts of his body.

The PUNCH reported that the suspected Fulani herdsmen stormed the village in the night with guns and cutlass and killed Olowoniyi on the farm.

Speaking with our correspondent, Rashidat claimed that the suspected herdsmen were 18 and stormed the farm at 12am with six motorcycles and started shooting indiscriminately. She added that some of the killer herdsmen reportedly attacked her husband in his sleep and macheted him to death.

She said, “We had slept that day but my husband decided to sleep outside. My son and I slept inside the room. I was inside when they killed him. They first started shooting; it was the gunshots that woke me up. I opened the curtains slightly and I saw them. They came in six motorcycles and three people were on each motorcycle. I saw them leave after killing him.

“He was dragged on the floor. They beamed torchlight around to see someone else but I dodged behind the curtains. I watched as they took his phone, wallet tied to his waist and ransacked his pocket for money. They spoke Fulfulde. That is what made me know that they are Fulani.”

On what she felt could cause the attack, Rashidat said that her late husband had two months ago complained to the Fulani community after some cattle reportedly ate his farm crops. She however said the Fulani community apologised to him, unknown to them that they planned to attack him later.

She added, “Cows ate the cassava on his farm awaiting harvesting. We were waiting for rain before harvesting so that we could plant new ones. That is the reason we didn’t harvest the cassava. The cassava we planted last was eaten by the cattle. My husband was angry because of the development.

“He challenged the Fulani on why they allowed their cattle to eat his crops. He told them that his farm was not in the bush. They begged him and everything was settled. That was two months ago.”

The widow further said her husband’s killers were still using his mobile phone, appealing to security agencies to apprehend the culprits and bring them to book.

She said, “We want the culprits to be arrested. We want the government to help us. The deceased’s child is still young. There is nothing I want to use to train him. He is just six years old. My husband’s death is a tough one for me because his death caused me much pain. He didn’t enjoy the fruits of his labour. He had started the new planting season but they didn’t allow him to finish it.”

Fifty-seven-year-old father of the slain farmer, Reverend Raphael Olowoniyi, described his death as a shock to him. Olowoniyi said he was devastated when he learnt about his son’s death.

He added that he saw his son last in December, 2020, claiming that his son’s killers removed his Adam’s apple and took it away. He added that an autopsy was carried out on the corpse to ascertain the cause of his death.

On how he heard news of his son’s death, Olowoniyi stated, “I was in church that day but we had closed. I was having a meeting with the men’s group that day. My wife was already aware of it but didn’t tell me because she didn’t want me distracted. When the meeting ended around 3:30pm, I saw that some people held my hands. I asked them what happened but they told me to follow them.  I asked them where they were taking me to but they told me not to worry. They later told me that my son, Dele, had been killed in Imeko.

“I asked them how he was killed and they told me that herdsmen killed him. I screamed and started shouting some people’s names to come to my rescue. He was murdered and his Adam’s apple removed and taken away.

“When it happened, the monarch of Imekoland rose against the incident. I couldn’t go to his palace that day because it was late. I was advised not to go because they said the herders were always on the road at night and I could be attacked.

“Early on Monday morning, I went to the palace of the monarch and he took steps immediately. The report the police wrote was that my son was shot. Some people said that he was murdered and an autopsy should be conducted. They gave me N50,000 for the test. I am related to them in Imeko though from Ekiti. That was why my son asked me to leave him there to farm. I spent six years in Imeko.’’

He urged the government to assist in catering to the needs of his slain son’s wife and son. He added, “They should help me. Many things were destroyed.  His wife and son are still there. They can give her a job. I am getting old. I have no money and would soon retire. My son told me in December that I would not suffer. But my son’s killers have denied me what my son promised me.’’

The Onimeko of Imeko, Oba Benjamin Olanite, while reacting to the killing of the slain farmer, appealed to the government to allocate the 378sqm forest reserve to farmers.

The traditional ruler complained that the herdsmen were hiding in the forest reserve, adding that the development made it difficult for them to track the perpetrators of evil. He also urged the state government to provide security in the axis.

He said, “The forest reserve is 378sqm. They should help us put it into use. That is where the evil people reside. They should allocate it to farmers to use as farmlands. The land is there and serving no purpose but now home for killer herdsmen.

In his reaction to the development, Chairman of the Imeko—Afon Local Government, Olusola Oke, said he could not quantify the loss of his people to the herdsmen menace.

He said the Fulani population was threatening that of the indigenes in the area.

Oke said, “In terms of materials, it is unquantifiable to determine the loss of the indigenes to the activities of killer herdsmen. From Iwoye area in the suburb, to Afon extension towards Oyo, you will discover that most of our people are farmers. They have abandoned their farms because they are in danger. If they go to their farms, criminal herdsmen can injure them.

Oke said people in the area were just beginning to speak out about the attacks, adding that the farmer’s death was terribly sad.

He said, “The young man slept outside his house and they killed him because he spoke against the destruction of his crops by cows. Since we cannot send away a Nigerian from a particular place in the country, if they want to live with us they should to live peacefully.’’

He also called for improved security in Imeko-Afon, saying, “We have expressed ourselves that they should at least give us three divisions. We have three zones: in imeko-Afon, in Imeko also and part of Iwoye/Ilara.’’