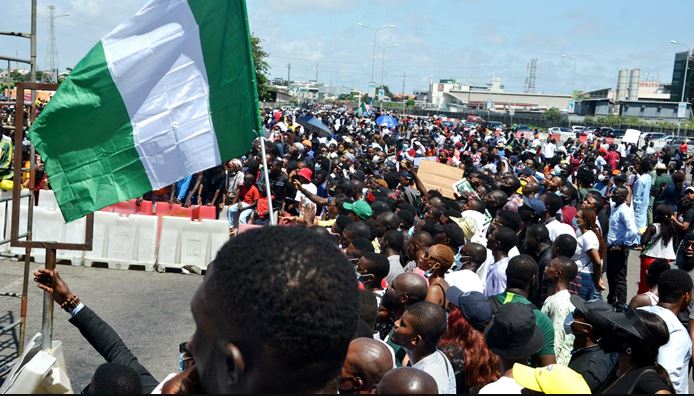 Alabi Oladimeji, the initiator of #DefendLagos, has revealed that the group has suspended its counter-protest expected to hold at the #Lekkitollgate today (Saturday).

He made this known at a press conference hosted on his Facebook page, noting that the suspension was necessitated by the assurances of the federal and state governments that no protest would be allowed to hold.

The PUNCH had reported that two opposing camps – #OccupyLekkiTollGate and #DefendLagos – planned to hold separate protests in Lagos State on Saturday.

Oladimeji, however, warned that #DefendLagos would organise a “huge” protest if the security operatives allowed the #OccupyLekkiTollgate campaigners to hold their planned protest.

He said, “No protest from #DefendLagos on Saturday (today). We are simultaneously respecting the state and federal governments.

“I am proud to announce that in the meantime, we will be pending this protest due to the law of the Federal and state governments. We are law-abiding and good citizens, definitely, we should not be the ones seen disobeying any law.

“In respect of the President, Muhammadu Buhari, and Lagos Governor Babajide Sanwo-Olu. I am now announcing that anyone involved in #DefendLagos initiated by me should with immediate effect pend the protest. We are not going to hold any protest again on Saturday (today).

“If Lagos and FG fail us, we will come out and protest on Monday.”

He explained that though depressing, the plan to protest was never for personal benefits but to ensure that no destruction occurred in Lagos State.

“It is depressing news for me because we have invested personal resources to produce banners, posters among others on this. But this is not an avenue for us to make money like those in the OccupyLagos,” he added.

The #DefendLagos campaigner also urged the governments to arrest anyone that contravened the directives stopping protests in the state.

The Federal Government and the police had earlier warned youths who planned to protest at the Lekki tollgate on Saturday (today) to have a rethink and shelve the protests.

But the young Nigerians, under the aegis of #EndSARS Season 2 and #OccupyLekkiTollgate, vowed to defy the government’s order.

They said their action was informed by the decision of the Lagos State Judicial Panel of Inquiry allowing the Lekki Concession Company to reopen the Lekki tollgate.

The #EndSARS protests had spread across the country in October 2020 to register the youths’ grievances against the alleged atrocities of the disbanded Special Anti-Robbery Squad of the Nigeria Police Force.

The protest, which gained massive international attention, came to a halt on October 20, 2020, when heavily armed soldiers allegedly shot protesters at the Lekki tollgate.

The PUNCH had reported that the Lagos State Judicial Panel of Inquiry probing the alleged killing of #EndSARS protesters by soldiers at the Lekki tollgate had, on Saturday, approved the reopening of the tollgate after about four months of investigating the Lekki shootings.

However, four out of the nine members of the panel faulted the report of the forensic experts hired to comb the scene for evidence.

The four members who faulted the forensic report also rejected the application by the Lekki Concession Company, operator of the Lekki tollgate, to take possession of the facility, which had been shut down since the probe of the shootings started.

The four members who rejected the forensic report are the two representatives of the civil society – Mr Ebun-Olu Adegboruwa (SAN) and Ms. Patience Udoh; as well as the two youth representatives on the panel – Rinu Oduala and Temitope Majekodunmi.

But the chairman of the panel, retired Justice Doris Okuwobi, and four other members of the panel acceded to LCC’s request to repossess the tollgate.