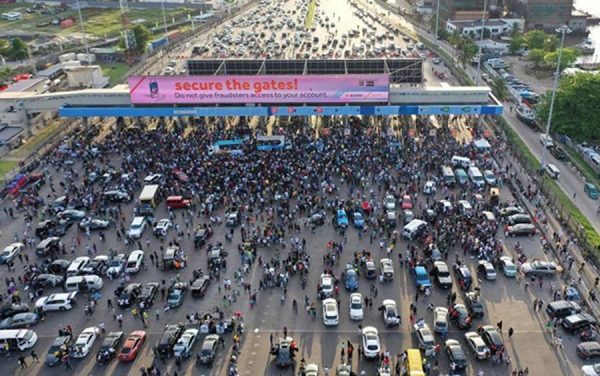 The Federal Government has said it will not allow a fresh protest at Lekki toll gate.

Recall that #EndSARS organisers are planning to stage a protest on Saturday at Lekki toll gate to protest the order by the panel reopening the toll gate for commercial activities.

According to TheNation, the federal government warned Nigerians against participating in any protest to block the toll gate.

It said all security agencies have been put on the alert to curtail any protest.

It said protests are constitutionally allowed only in designated places but not toll gates.

It confirmed intelligence report which showed that the latest protest might be hijacked to cause violence nationwide.

The Minister of Information and Culture, Alh. Lai Mohammed spoke in Abuja against the backdrop of a renewed protest at Lekki Toll Gate as from Saturday.

The Minister said: “However, any further resort to violence in the name of #EndSARS will not be tolerated this time.

” The security agents are ready for any eventuality. A situation in which six soldiers and 37 policemen were murdered in cold blood by hoodlums will not repeat itself.

” The attack, looting and razing of 269 private and public property will not happen again. The killing of 57 civilians will not be re-enacted.”

” No government anywhere will allow a repeat of the kind of destruction, killing and maiming wrought by the hijackers of #EndSARS protests last year.

” After all, only one policeman – (plus four others) – was killed in the invasion of the US Capitol in January, yet the FBI has continued to hunt down and prosecute the perpetrators. No life is more important than the other.”

Mohammed warned those planning the protest to shelve it.

He added: ”We therefore strongly warn those who are planning to re-occupy Lekki Toll Gate on Saturday to desist.

” We know that many of those who have been loudest on social media in advertising the plan to reconvene in Lagos on Saturday are not even in Nigeria.

“They are elsewhere around the world fanning the embers of violence and inciting gullible people back home. No one should fall for their antics.”