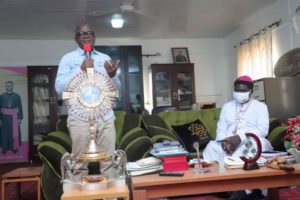 Benue state governor , Mr. Samuel Ortom, has secured the release of Mr. Elijah Ode, a Benue born barber, who was recently arrested and detained in Kano state for alleged blasphemy.

This was contained in a press statement signed by the office of the state deputy governor, Mr. Benson Abounu.

The statement reads: “The Deputy of Benue State, His Excellency, Engr Benson Abounu is pleased to announce that following the intervention of the state Executive Governor, Dr. Samuel Ortom, Mr. Elijah Odeh, the young barber of Benue State origin, who was held in detention in Kano state over alleged blasphemy has been released.

“The Governor had reached out to his Kano State counterpart, Alhaji Abdullahi Ganduje, and appealed to him to intervene in the matter; a request he obliged.

“His Excellency, Governor Samuel Ortom wishes to express his thanks and appreciation on behalf of the Government and people of Benue State to Governor Abdullahi Ganduje, whose direct intervention secured the acquittal of the young man from the Sharia court.

“We wish to thank all those, who kept faith with the quiet diplomatic effort of the Benue Government to secure the release of the young man”