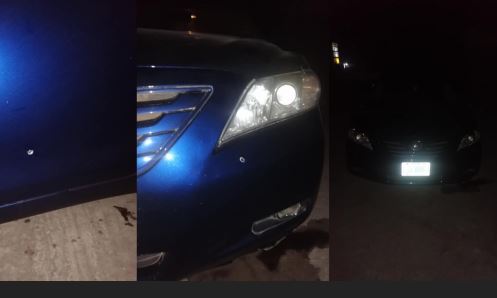 He explained that he would have been killed, but for the courage, he had to drive past while they were shooting at his vehicle by heavily-armed Fulani men.

Gabriel Ogunlana, a native of Oyo State, has told the story of how he escaped an assassination attempt by herdsmen in the Eruwa part of the State.

Ogunlana told SaharaReporters that he would have been killed, but for the courage, he had to drive past while they were shooting at his vehicle by heavily-armed Fulani men.

He said he was driving along the Eruwa-Ibadan Road on Saturday evening when he was almost killed by the Fulani herdsmen.

He said: “I escaped a kidnapping attack along Eruwa-Ibadan Road. When I first heard a gunshot, I thought it was my tyre that deflated but I didn’t stop, only to set my eyes on three of them firing at me and my car. I could see five fully armed Fulani men on the road.

“My car was shot at repeatedly. Bullets damaged my tyres and pierced the gearbox of my car.”

According to him, the attackers were of Fulani extraction, adding that there is a Fulani settlement along that road.

He also said Fulani killed a wealthy man on the road for refusing to follow them after he was attacked.

“There is a popular market on the road between Ibadan and Eruwa. The name of that market is Okolo market. Okolo market is just eight kilometres away from Eruwa.

“There is a Fulani market called Kara market, it is about four kilometres away from Okolo. Between Okolo and Kara market is a place called Tipala. Tipala is about two minutes drive to Kara market.

“A few days ago, Fulani attacked another person on the same road. The person was reported to be rich and the person was killed by the Fulani upon his refusal to follow them,” Ogunlana said.