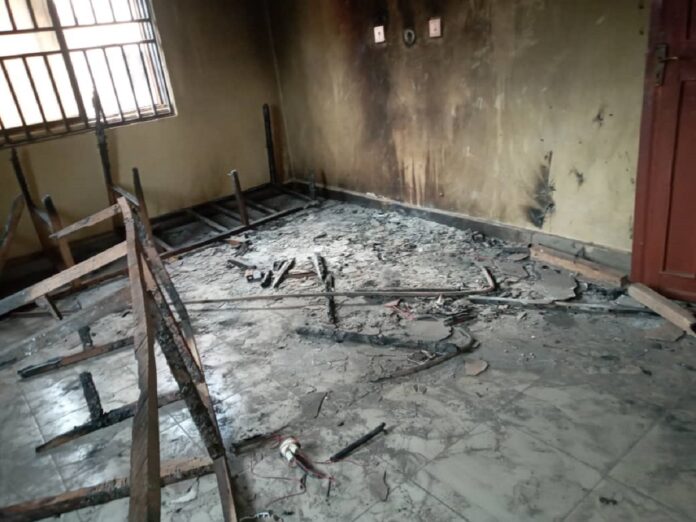 Strange as it may sound that former Depot Manager, Nigerian National Petroleum Corporation (NNPC) Chief Afam Uzowulu, has been accused of burning of belongings of his three children and estranged wife, Mrs Chinyere Uzowulu.

Uzowulu had been battling to divorce his wife and recover the house where she lives with his three children – two boys and a girl who are between the ages of 9 and 12.

But despite the divorce case is still pending before the Supreme Court, in Case No SC/CV/895/2020, the Ex-NNPC manager engaged thugs to vandalise a duplex where the wife and children where living, located at No 1/3 Uzowulu Street GRA, Enugu.

The roof of the house was removed, doors broken, furnitures destroyed, perimeter fencing and gates completely pulled down.

Addressing newsmen in Enugu on Monday, Chinyere said accused her estranged husband of vandalising and burning down all her belongings and that of her children which included clothes, children’s computers and books.

She said that Chief Uzowulu burnt her belongings despite Inspector General of Police order, which directed the AIG Zone 13, to investigate the matter and charge him to court for malicious damage and vandalism.

Chinyere said, “I went to the house last week with police from Enugu legal department and staff of Women Aid Collective (WACOL) to see the vandalised duplex. To my greatest surprise, I met my clothes, children’s books on fire inside the compound. All the furnitures were completely burnt and the ashes were everywhere in the compound.

“My kitchen cabinet was burnt inside the house and police saw it and pictures were equally taken.”

She further stated “a room where my belongings and children where packed for safety where set on fire and all the belongings burnt. My personal cars vandalized and tolled off the compound.”
She alleged that her husband began to burn their belongings after putting the gate and fences he damaged so that people would not see before she came into the premises with police and WACOL.

Our correspondent gathered that Chief Uzowulu was convicted in 2016 by Chief Magistrate N. V. Anibueze in Charge No. MEN/442c/2016 for the same vandalism and malicious damages of the wife’s property.

In the judgement order which our correspondent sighted on Monday, between the Commissioner of Police Vs Engr. Afam J. Uzowulu, the court declared:

“That the accused is guilty in count 1 of this charge and is hereby sentenced to one month imprisonment or to pay a fine of N10,000.00.

“That the vehicle marked Exhibit “B” be released to the complainant (the estranged wife)”.

When contacted on telephone, Chief Uzowulu declined comment on the matter.