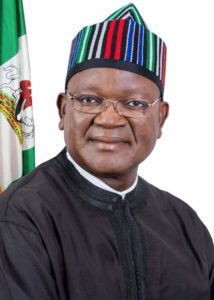 The Governor of Benue state, Dr. Samuel Ortom, has promised to complete the ongoing projects within Utyondu and other parts of Ihyarev extraction.

Represented by Dr. Cletus Tyokyaa, the Governor expressed joy over the spirit of togetherness being exemplified by Utyondu people.

Earlier, Dr. Tivlumun Nyitse, leader of Utyondu nation who spoke for the entire Utyondu said it was in the best interest of every political party to seek for unity.

He stated that the unity and togethernes being demonstrated by the Utyondu people who were in other political parties to join the PDP, the party they are known for clearly shows that they are solidly behind the Governor’s political aspiration come 2023.

Dr. Nyitse said it was time to support His Excellency who has become a voice of the Tiv nation.

In his address, the Executive Secretary, Benue State Emergency Management Agency, SEMA, Dr. Emmanuel Shior who is also an illustrious son of Utyondu, commended his people for their decision to support Governor Samuel Ortom for Senate come 2023.

He further stated that, the decision is a wise one to compensate the Governor for his good deeds.

Hon. Boniface Ortese who spoke for Uvir block of Utyondu extraction said with the massive defection of prominent sons of Uvir into the PDP fold, no one is left out in opposition political parties.

Speaking for Mbadwem and Mbabai, Hon. Pharm. John Enger and Barrister George Usongu respectively noted that they had resolved to work as one indivisible family as well as support Governor Ortom’s unshakable cause to defend the Benue valley.

In appreciation, Leader of the defectors, Barr. Innocent Daagba said, their decision to join force with their brothers in PDP was as a result of Governor Samuel Ortom oriented projects and his dogged spirit to defend Benue people against invaders.

He also cited the Governor’s agricultural policy which has attracted investors, listing the all year farming activities which would soon commence at Buban Ruwa, Uvir Council Ward.

The decamping rally attracted many supporters including youths and women of Utyondu nation, expressing their solidarity with Governor Samuel Ortom for Senate, and their son from Utyondu Dr. Emmanuel Shior, for House of Representatives, Makurdi/Guma Federal Constituency, come 2023.