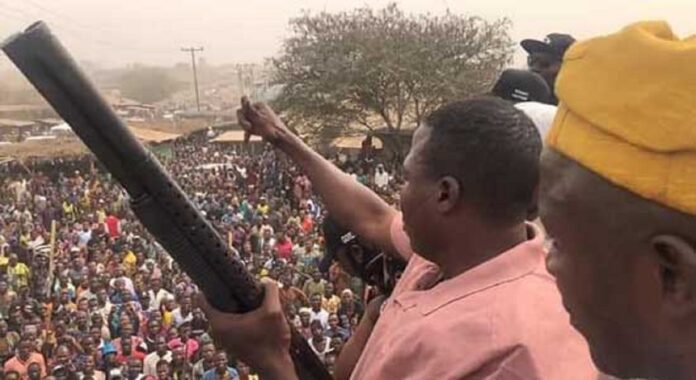 In this interview with a popular broadcaster, Kola Olootu, Chief Sunday Adeyemo, popularly known as Sunday Igboho, speaks on why he gave a quit order to killer herdsmen in the Ibarapa area of Oke Ogun, Oyo State. WALE OYEWALE, who monitored the interview online, brings the excerpts

We heard that you have been arrested, is that true?

You were seen in a video playing table tennis; how authentic is that?

It is an authentic video of me at my residence.

The gate of your residence was highly fortified, why?

Tomorrow (Friday) is the D-day when the ultimatum given to killer herdsmen would elapse. This is not an issue that affects Sunday Igboho but a matter of concern to the entire Yoruba race. I am saying it pointedly that I am too strong for Fulani bandits to attack or capture, so this matter is not about me at all. I don’t have a child who would be kidnapped by Fulani men because my children are not even based in the country.

We learnt that when gunshots were fired at you during your visit to Seriki in Igangan community, the bullets did not penetrate?

That shows the efficacy of the Yoruba traditional power. It would not be a hard nut for the Yoruba people to crack, rather the evil marauders killing and maiming our people would be visited with retribution as God lives.

What was the basis of the ultimatum that you gave the killer herdsmen?

The reason for that was the incessant attacks on our people in the Ibarapa and Oke Ogun areas of the (Oyo) state. Our people are no longer safe in their own land. On the contrary, Yoruba people don’t engage in such atrocious things. You cannot see a Yoruba man going about killing people in Kano. In the North, they can behead a Yoruba man for slapping a Hausa/Fulani not to talk of destroying their farmlands. You will recall the case of ‘Oko Oloyun’ ( a popular herbal medicine practitioner)  who was killed during a visit to his country house. He was killed at Igbo Ora. Government said they would unravel the facts behind his killing but till now, the matter has not been unravelled. That killing would clock up a year this month. Another illustrious son, Dr Fatai Aborode, returned from overseas and cultivated a farmland in Igangan. He employed about 300 people. When his farm was plundered by cattle, he lodged a complaint with the Seriki Fulani. Few days after, killer herdsmen kidnapped him, tied him and butchered him. Nothing was done and no arrest was made.

We heard that his killers insisted on getting money before releasing his corpse, could you confirm that?

That was the story that we heard. After that, they also killed a woman, an Alhaja, a native of Imeko who brought the ransom. Many like that had been killed, including the son to Oba Abdulazeez Adeoye of Igangan. Before getting to Seriki’s residence, you have to pass through three local security checkpoints. Seriki is so powerful, (even) more powerful than traditional rulers in the zone. They rape women coming from the farm at will and nothing is done about it. Now, we are determined to defend our people, but they say we don’t have the right to do so.

That is it. Some people alleged that I’m doing this to gain cheap popularity, far from it. Some even said perhaps I’m trying to do it to enrich myself, but that is not also correct.  The fact is that I am a rich man. I am not seeking favour from government because I’m a contented person. I don’t need money or favour from government, but I am from Ibarapa. Before now, during hot weather, we used to lay our mats and sleep outside the house or in the courtyards without any fear. In those days, we sometimes returned from farm around 1am without any molestation or fear of possible attacks. But things have changed. People no longer feel safe. Those in government need to know that without the citizens there would be no government.

You alleged that some people were trying to threaten you?

I was being intimidated by some people but I replied saying that whoever would kill or bring me down must be well fortified.

What were the things you saw inside Seriki’s residence?

I was told that some traditional rulers in the area collect money from them and honour them with traditional titles. They also give them land.

I told Seriki that we could no longer cohabit with him and his people because he is a betrayer. I am not against Hausa/Fulani people. I have many of them as friends at Sabo, Ibadan.