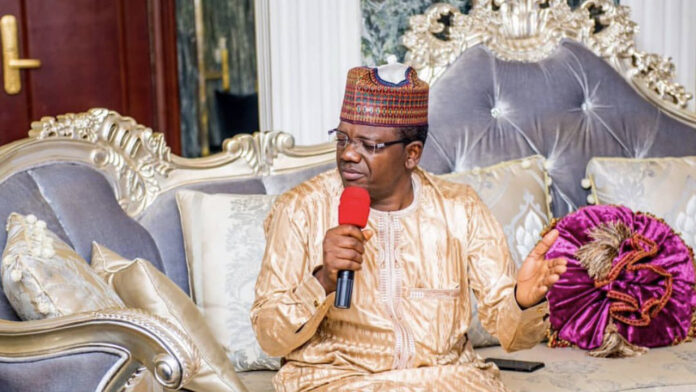 The Patriots for the Advancement Of Peace and Social Development (PAPS) has described the allegation by the Sahara Reporters that the Zamfara State Governor Bello Matawalle is supplying Hilux vehicles to bandits as wicked, malicious and irresponsible journalism.

This is the Nigerian Army has refuted the claims that Governor Matawalle has been supplying Hilux Vehicles to aid the bandits.

The Nigeria Army in a statement refuted the story describing it as absurd.

The statement signed by Brigadier-General Musiliu Bello said that absurd story peddled by the online news medium Sahara Reporters that the state government has doled out Hilux vehicles to repentant bandits who are using them in terrorising the state is reckless and unfounded.

In a stern refutation to the story, Brigadier-General Musiliu Bello rejected the story as false testifying that Governor Bello Matawalle has only aided the military and other security operatives with 200 Hilux vehicles.

Reacting to the news report published by the online platform the Chairman Of PAPS Dr Sani Abdulahi Shinkafi stated that at the time of fragile peace in the country Sahara Reporters should not be seen feeding the public with stories that are not only fake but outright falsehood.

Specifically Sahara Reporters had in a recent story had alleged that Governor Matawalle is aiding the bandits by donating Hilux vehicles to them Shinkafi described the report as reckless and irresponsible coming from a news medium like Sahara Reporters.

But the PAPS Chairman described the report as baseless and politically motivated to incite the people of Zamfara State against the Matawalle led government.

Shinkafi pointed out that “the Sahara Reporters is being used by the enemies of Zamfara State to fan the embers of war. The report is aimed at derailing the efforts of the Governor to destabilize and dismantle the bandits who have held the state hostage for the past eight years of the previous administration in the state.

On the allegation credited to the former Local Government Chairman Ahmad Maradun Shinkanfi accused him  of inciting members of the public against the Governor Bello matawalle and his govt out of anger and frustration over his sack by the Zamfara State House of Assembly  for allegation for  misappropriation of the Maradun Local govt funds,Abuse of office , aiding and abetting armed banditry.

Shinkafi noted that Maradun is just being a bad loser who is unable to come to terms with the fact that he has lost his plum position due to his own greed and he thinks that the only way he can remain relevant is to attack the Matawalle led government and court cheap popularity.

Specifically,Maradun,had alleged that Matawalle gave the bandits Hilux vehicles, which they used to attack innocent residents. According to him, the hoodlums who killed 10 people in Janbako community used two of the vehicles.

“They went to that village in two of the Hilux vehicles given to them by the Zamfara State Government. One of the vehicles broke down and was abandoned by the bandits. These bandits have been using the vehicles to kidnap, kill and rape innocent people and the press has been silent,” he added.

He stressed that the bandits also killed three soldiers, including a major, adding that the attack was not reported.

However, Shinkafi described the allegations as malicious, wicked and irresponsible adding that no sensitive government will aid terrorists to attack, kidnap or kill its citizens.

He described Maradun’s allegations as unpatriotic and accused him of being committed to disrupt the good policies and programs of the governor, most especially the ongoing peace and reconciliation process initiated by the governor early last year.

Shinkafi called on the Inspector-General Of Police (IGP) the Director-General Of the State Security Services to investigate and possibly arrest and prosecute Maradun for public incitement,fake news and inflamatory statement  attempts to breach the fragile peace that had been restored to Zamfara State by the Governor Matawalle led administration in the past eighteen months.

Shinkafi gave Sahara Reporters and Maradun a 14 days ultimatum wishing which to retract the malicious statement and publicly apologize in five national newspapers of face court action for breach of peace and circulation of fake news.