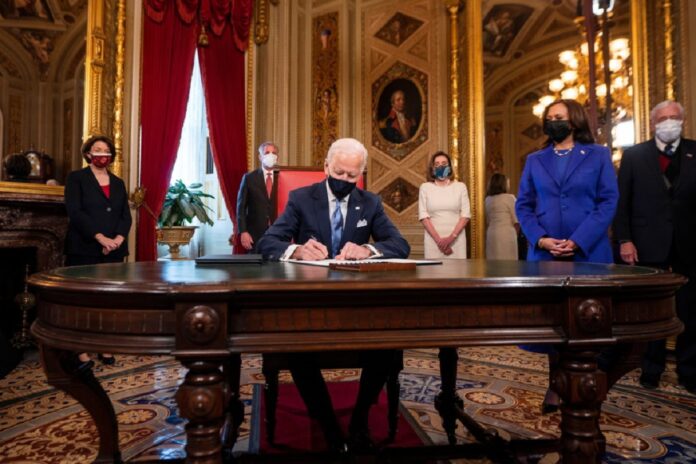 Twelve minutes before noon on Wednesday, President Joe Biden was sworn into office as the nation’s 46th president. Seven hours later, the United States reported more than 4,409 new deaths from the novel coronavirus, according to data collected by the COVID-19 Tracking Project.

The Biden administration came into power with purpose and an extensive agenda to combat the coronavirus pandemic, but purpose and planning only gets you so far—particularly when the president’s team is only just now getting a clear picture of how badly the previous administration had managed the crisis.

“What we’re inheriting from the Trump administration is so much worse than we could have imagined,” Jeff Zients, the Biden administration’s COVID-19 czar, said in a call with reporters Wednesday. “We don’t have the visibility that we would hope to have into supply and allocations.”

“I think we have to level-set expectations,” added Tom Frieden, the former director for the Centers for Disease Control in the Obama administration. “There are lots of things that an incoming administration can do on Day One, including speaking honestly about the pandemic.”

The new administration is already behind, in part because the Trump administration was unprecedentedly hostile during the transition. The question now, however, is how Biden can get a handle on a raging pandemic when his team is already so far behind.

The task at hand is enormous. More than 400,000 Americans have died of COVID-19. Every state, territory and the District of Columbia is in a state of emergency. The number of people infected with the virus who are now hospitalized is more than double the number reached during the spring and summer peaks.

It’s not just the spread of the virus that the Biden team needs to tackle. Officials will also have to confront the disinformation and misinformation about the virus that has permeated all four corners of the country—where people still believe the virus is a hoax and that public health guidelines are too great of an imposition on their personal freedom to follow. But it’s unclear what power of persuasion the Biden administration will hold and if it will be enough to convince people to take the virus more seriously.

“At least we won’t have a president that’s actively fighting those rules on national television,” one official working with the new Biden COVID-19 team said.

More urgently, Biden and his team will have to handle the growing frustration among states over the lack of a comprehensive vaccine-distribution program that enables them to inoculate their residents quickly. They will have to find a way to get states more vaccines needed to meet Americans’ growing demand for the shot.

Biden’s COVID-19 team says the president will use the Defense Production Act (DPA) to ensure that health-care facilities have what they need for personal protective equipment and to continue to scale testing across the country. Officials say Biden will also use the act and “other legal authorities” for “raw materials to ensure that bottlenecks do not slow down [vaccine] production,” Zients said, specifically mentioned the production of syringes as critical to success.

It’s still unclear exactly when the president will invoke the DPA, and if the administration will lean on the legal authority for the production of supplies other than vaccine syringes.

“Making vaccines is not simple, and you can’t cut any corners,” Frieden said. “We’ll see if there’s anything more that can be done.”

Biden enters office as states across the country are grappling with massive vaccine shortages. Hospitals and pharmacies have begun to run out, forcing them to cancel first and second dose appointments. Officials in states such as California, Pennsylvania, Kentucky, New York, New Jersey, and Arizona this week called on the federal government to not only help facilitate the shipment of additional vaccines but to clearly communicate how many doses they should expect to receive in the coming days. They’ve received no answers, according to six state health officials, all of whom requested to remain anonymous to speak more freely about the issue.

Those officials said the Biden team has for weeks reached out to states to assuage their concerns about the lack of a cohesive and functioning vaccination distribution system. The Biden message to frustrated governors was simple: help is on the way. But as White House officials begin to strategize on how best to remedy the situation they are finding that the foundation on which the Trump administration built its vaccine distribution program is more flawed than previously understood, according to two individuals involved with vaccine planning. From the accounting to the way vaccines are allocated and scheduled for delivery—the system doesn’t allow for the quick movement of vaccines off the manufacturing line to state vaccine distribution points, those officials said.

The former Trump administration built out the vaccine distribution process within the confines of Operation Warp Speed, a public-private partnership to fast-track a novel COVID-19 vaccine. In the first few months of its existence, Operation Warp Speed focused on development—creating the country’s first effective mRNA vaccine and supporting companies’ clinical trials. The distribution strategizing came later. Developed by the military, the plan was to have the federal government, specifically the military officials within Operation Warp Speed, lead the logistics part of the vaccine delivery. The military would not actually touch the vaccine but would instead coordinate the effort from the Pentagon.

Part of that coordination required states using the Pentagon’s Tiberius system—a platform that allows local officials to input their orders and see when they will be receiving their next doses. States only had a few weeks to try out the Tiberius platform before the vaccine rollout began in December, officials said, and they were provided false projections on how many doses they would be receiving once the Pfizer vaccine became available.

Two state health officials who spoke to The Daily Beast said they believe the Tiberius system is still not accurately updating and is miscounting either how many doses the companies have manufactured or how many have been allocated by the federal government. Those officials said they have yet to receive responses from federal officials about whether their most recent orders for Pfizer and Moderna jabs have been filled.

Part of the confusion among states is how the newest Trump administration federal guidelines on vaccine distribution have impacted the manufacturing process. The Department of Health and Human Services, along with the Centers for Disease Control, recently released a new set of recommendations that allow states to hand out the vaccine more freely—to widen the population of who can receive the shot in the first wave. The federal government also said it would start to release doses it had originally held in reserve for second-shot dosing.

“There were more than 12 million hits to a map of providers we posted yesterday so it is clear that many Pennsylvanians are eager to get the COVID-19 vaccine,” a spokesperson for the Pennsylvania Department of Health. “Unfortunately, we do not have enough vaccine for everyone who wants it right now.”

The policy centerpiece of Biden’s attempt to turn the tide on the pandemic—and the devastating economic consequences it has also wrought—is a $1.9 trillion relief package he rolled out a week ago. It calls not only for expanded unemployment help, small business aid, and $1,400 direct checks, but $350 billion in relief aid to state and local governments to boost testing and vaccine rollout, and $20 billion and $50 billion for separate vaccine and testing initiatives, respectively.

But that proposal faces an uncertain environment on Capitol Hill—particularly the Senate, where Democrats now hold the tie-breaking vote and where an impeachment trial of Trump is expected to eat up at least a week of the upcoming legislative calendar. The president’s allies fear that the trial, combined with Biden’s urgent push to confirm members of the cabinet who will help enact his efforts to control the virus, could push passage of his trillion-dollar “rescue plan“ into late spring.

Democratic senators, who largely agree with Biden’s assessment that their $900 billion December relief bill was merely a “down payment” for a more expansive follow-up, are anxious to see the Senate leap into action at a pivotal moment in the country’s struggle to control the virus.

“It’s the top priority,” said Sen. Tim Kaine (D-VA). “My gut tells me we will do all we can to find a bipartisan accord on it. There are many pieces of the proposed package I think that will generate significant Republican support.”

Biden’s transition has actively reached out to lawmakers in both parties to sell them on their plan; Kaine told The Daily Beast that the process will “really accelerate” now that Biden has been sworn in.

With GOP support a must to reach the 60-vote threshold—otherwise, the legislation will be stripped down only to issues relating to government spending and revenues—the administration is making a point of courting Republicans inclined to support such a proposal. One of them, Sen. Lisa Murkowski (R-AK), said as she left the inaugural ceremony on Wednesday that she had already gotten the Biden team’s pitch and a chance to directly ask them questions.

“I got a pretty good walkthrough of their COVID proposal yesterday,” Murkowski told The Daily Beast. “It’s going to require, I think, a fair amount of debate and consideration. But he’s made it clear that this is his initial priority. I don’t disagree with that. We’ve got an economy that’s really been hurt, we’ve got a vaccine that needs to get distributed—we’ve got a lot of work to do.”

A key Democratic vote, centrist Sen. Joe Manchin (D-WV), told reporters on Wednesday that a bipartisan group of senators—the same cohort that pushed the last round of COVID relief out of a stalemate last year—is slated to meet with White House officials this weekend to talk about the economic side of their plan.

Sen. Lindsey Graham (R-SC) told reporters he hoped that group could produce a counter-proposal, rejecting some parts of Biden’s plan—such as its raising of the federal minimum wage—out of hand.

The willingness of senior Republicans to even contemplate a deal puts wind at Biden’s back—and justifies the prayer, invoked in his inaugural address, that a nation united in common purpose may be able to turn the tide against the virus.

“We must set aside politics and finally face this pandemic as one nation,” Biden said. “And I promise you this, as the Bible says: ‘Weeping may endure for a night, but joy cometh in the morning.’ We will get through this together. Together.”