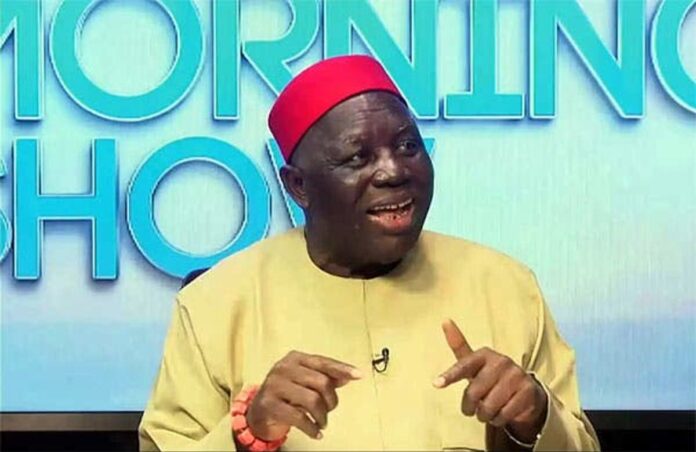 THE President-General Ohanaeze Ndigbo, Prof. George Obiozor has disclosed that a memo he wrote with late President of the Senate, Dr. Chuba Okadigbo, led to the granting of presidential pardon and amnesty to late Biafran warlord, Dim Chukwuemeka Odumegwu Ojukwu by former President Shehu Shagari in 1983.

Obiozor disclosed this in Enugu when he paid a courtesy visit to former Deputy Senate President, Ike Ekweremadu.

While commending Ekweremadu for his support during his election as Ohanaeze President-General, appealed to Ndigbo to be united and work together for collective interest of the zone, recalling his long service to the people and Nigeria in general which he said spanned more than 50 years.

Accompanied by his Secretary-General and former Nigerian Ambassador to South Africa, Okey Emuche; other members of his executives, said that it was God’s design that the first person he was visiting after his emergence as Ohanaeze PG was Ekweremadu.

“Since I’m Augustinian Catholic we believe in the doctrine of predestination. I believe that God plans everything and it happens in accordance with God’s time. Now, it is not surprise to me that the first place that I will come to receive blessing for this office is Ekweremadu.

“I want to tell you something about my own feeling about the Igbos. We are a people of destiny, the similarity between Igbo spirit and that of the Jews is amazing to me; as an academician I wrote about it, read about it and as an Ambassador in Israel, I saw it happen. The greatest revenge against injustice is success,” he said.

The President General of Ohanaeze Ndigbo Ndigbo who later visited his immediate predecessor, Chief John Nnia Nwodo said he has been working for Ndigbo as a matter of fact did the negotiation to bring Ojukwu back to Nigeria from Ivory Coast.

“I’m George Obiozor unknown then, the man in white suit, dark glasses, who did the negotiation to bring Ojukwu home from Ivory Coast… with my friend Chuba Okadigbo. Anybody telling you he knew what happened is wasting time. It began in 1972, Ojukwu’s return began in 1972, ten years later in 1982 we were close to accomplishing it; by 1983 we got amnesty. Nnia Nwodo is privy to how the memo that got Shagari to grant Ojukwu amnesty came about.

“Chuba and I originated the memo, why? Shagari had just granted pardon to Gowon. We went to him, and told him if you don’t want to do any single thing for Ndigbo, do this. He agreed without informing anybody because he was full of fear. And that fear was that ahh! on the eve of Ojukwu’s return a coup threat,” he recalled noting however that Ojukwu eventually returned to the country based on Shagari’s pardon.

Responding, Ekweremadu congratulated Obiozor and his team, stated that under his leadership, “Ndigbo is safe… you are a man of history and you came at the right point”.

Ekweremadu however, challenged Obiozor to do everything possible to ensure that his administration delivered a Nigerian president of Igbo extraction, saying that if that is the only legacy he would leave behind he would have achieved everything for the people.

At Nwodo’s house, Obiozor appreciated his sacrifice for Ndigbo, despite the fight against his administration.

On his part, Nwodo said that God gives power and nobody can seize it by force.

“Even if you rig it (election), God allows it to be so.

“Those challenging your election, non of them has the exposure and diplomatic experience you have. I know you are going to go through murky waters but I will stand behind you,” he said.