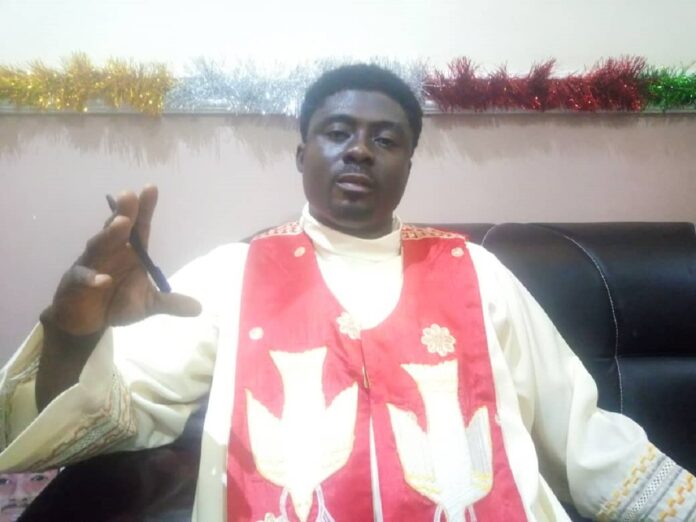 Rev. Fr. Obimma Emmanuel, aka Fr. Ebube Muonso, the Spiritual Director of the Holy Ghost Adoration Ministry, Uke, and the Rector of the Blessed Iwene Tasnsi Pilgrimage Center, Umudioke, both in Anambra State, has made a forecast into year 2021, predicting trouble for corrupt politicians, surprising emergence of next Anambra governor, death of high profile politicians, among other predictions.

According to him, “God has revealed a lot of things to me concerning year 2021, and what it holds in stock for Nigerians and the world. Some are good and some are not good. But I pray that the spirit of God will take absolute control of negative events and postulations for year 2021.

“At the political front, I foresee change of power. In Anambra, outcome of the November 2021 governorship election will shock many. As you can see, many are jostling for the governorship seat, but God has already given me name of the person that will take over from Obiano. The Holy Spirit told me God has strengthened the person to take Anambra to the next level. When I was praying for good governance in Anambra, the Holy Spirit revealed to me the fall of an empire; fall of an empire. The Holy Ghost opened my eyes and I saw an empire overthrowing another empire. God showed me the man that will take Anambra to the next level, and his name also appeared. When the name appeared, I prayed to God, and God said this is the one I want.”

The cleric, fondly called Ebube Muonso (Glory of the Holy Ghost) because of his attachment the Holy Spirit, also said his vision and prediction never failed. He said: “The Holy Ghost has never given me any vision and failed. Ever since I was born; ever since I became priest; the Holy Ghost has never given me a failed prophecy. None of my prophesies failed. In 2015, when I was telling Nigerians that Buhari would win presidential election, but that Nigerians would suffer; people didn’t take it serious. It came as a result of revelation. When I was telling our people that Hope Uzodinma, who took the 4th position during the Imo State governorship election, would eventually become governor, people did not understand it. I told people that Willie Obiano would win his first tenure. I also did so during his second term election. God’s ways are not our ways. In 2021 governorship election, the electorate is going to do conscience voting; not money voting. The people will no more vote based on religious affiliation, creed or political platform. That is how the new order will come, and people will be surprised. God has revealed the man to me. It does not matter whether he is a Catholic or Pentecostal or Anglican. The important thing is that he is a good man; he is selfless. He is actually the person destined to take the mantle from Willie Obiano to continue where he stops. God revealed to me that the next government in Anambra will be better than what we have today.”

In the area of insecurity, he expressed worry that crime wave and corruption are increasing by the day, and charged the president and his vice to resign for their alleged failure to secure Nigerian citizens. “The president of this country has failed the people. Insecurity has snowballed considerably in the recent years. I can see another protest coming; this time, it is going to be something fiercer than EndSARS. Politicians have really failed Nigeria and its people because of their selfishness. If I were President Mohammadu Buhari, I would have resigned long ago. I am particularly worried that the vice president, Yemi Osinbajo, would allow himself to be soiled in a corrupt system. I am sorry to sound this way. Politicians have killed the future of our youths; they have mortgaged the future of our youths. I pray that a youth president will emerge in 2023. The Holy Ghost revealed to me that a youth president will change the face of this country. We have a lot of them; experts for that matter, who can change the face of Nigeria; but the problem is that they were sidelined and elbowed out. They are not given the chance to showcase their potentials.”

On COVID-19, Fr. Ebube Muonso predicted that the second wave of the ailment, though fiercer, would not take the life of anybody among the faithful. “Again, in the spirit realm, God released a wind of divine security upon His people. Many people are afraid of COVID-19; but God says they should not be afraid. The second wave of COVID-19 is here; but the same God that protected His people during the first one is saying He will also protect us this time around. I am not saying Nigerians should not apply the necessary protocols to check the pandemic; but that one is a physical measure. Let us be conscious of the fact that the spiritual control the physical. I want the faith of the children of God to be raised high. Have faith in the lord. Even though the second wave of the pandemic is going to be fierce, yet, it is not for our country Nigeria. The Almighty God says that in 2021, He will make our atmosphere unconducive for the coronavirus. Bill Gate and his wife predicted that COVID-19 would descend mightily upon Africans; but his prediction was not of God.  As you can see, God has different purpose concerning us. He will not allow negative prediction to prevail. I am active in my prophecy against COVID-19. The first one came and was gone. The second one has also come; but God says He will also protect us. No hair shall be lost.”

He continued: “God has also revealed to me the death of high profile political leaders; but those that hope in the lord shall renew their strength.  They shall move from strength to strength. For members of the Holy Ghost Adoration Ministry worldwide, year 2021 is going to be an extra ordinary year of thanksgiving, songs and praises. The Holy Ghost says we should praise God; because, when we praise Him, He will continue to do more.”

He also urged the faithful to live the life of appreciation in 2021, saying that thanksgiving is what God desires from His people to lift them higher in 2021. He said: “God says we should live the life of appreciation. He says we should show love to others and also live the life of prayer. There is no problem you cannot settle with prayer. Prayer is very essential in the life of every Christian. God says if there is someone to pray, there is always the God to answer. God says for every Goliath in the front of you, there is always a stone. So, I encourage the people of God to pray. God is telling us to pray, thank Him and appreciate Him for His numerous blessings. 2021 is going to be year of extraordinary praise and thanksgiving.”

The cleric also commended the initiative of the Indigenous People of Biafra, IPOB, in setting up a security outfit for the south east people; saying that every man has the right to life. “It is the duty of the federal government to protect the lives and property of the citizens. But, as you can see in our country, Nigeria, security is very porous. I will always tell people that I will not allow anyone to kill me and go for confession. If I noticed that you are a danger to me, or that you want to take my life, I will be the first person to open my trigger. Activities of herdsmen are becoming alarming. I am of the view that everybody should get himself armed. It is not correct that you are in your own soil and a visitor comes to your house to behead you, kill your children, and rape your daughters and wives. No, that nonsense must stop. How could one claim to be a herder, and will bear AK47 gun, and kidnap people? That is to say they have different agenda. Since they have different agenda, it is necessary that people of the south east should restrategise to combat their attacks.”