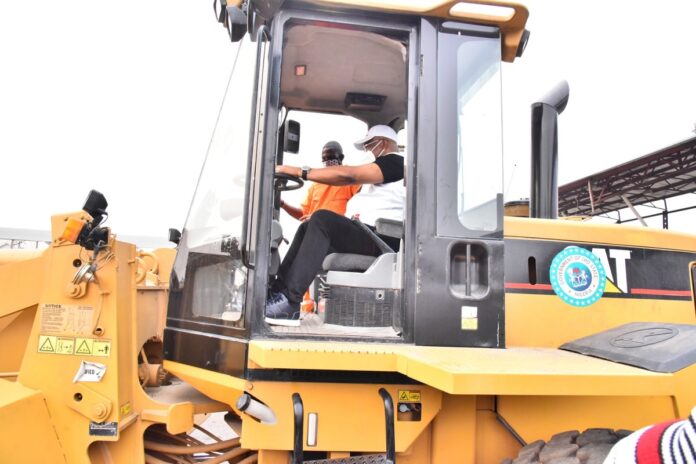 Governor Hope Uzodimma of Imo State on Tuesday flagged-off rural roads project reconstruction in the 27 Local Government Areas with a promise to apply the 3R mantra of rehabilitation, reconstruction and recovery of his administration to the fullest.

He said his plan to recover all broken down infrastructure in Imo State, both at the urban and rural areas remains irrevocable.

Performing the ceremony at the Heroes Square along Concord Avenue, New Owerri, the Governor said that some of the equipment to be put to use were recovered from those who stole them to complement those that were purchased by his administration to ensure maximal effect through the 10 Federal Constituencies of the State.

He reiterated his administration’s concerted efforts to recover every stolen property of the State, noting that Government will continue to put every machinery in place to do so and also deploy such equipment and property of to where they will be of benefit to Imo people.

The Governor said the commissioning and deployment of the equipment is targeted at rural communities and most importantly, the rural agricultural roads, as well as the need to make them passable and motorable.

He directed that the tractors so deployed will be supervised by the Chairmen and members of the Interim Management Committee.

He said for proper coordination of the 27 Local Government Areas in the project implementation, “work should be carried out simultaneously, under a planned time-table” and that the effort is borne out of his promise to the people of Imo State.

Earlier while introducing the project to the Governor, the Commissioner for Special Projects, Barr. Kingsley Ononuju noted that the flag-off was borne out of the desire of the Governor to ensure that rural dwellers have passable roads that will make life easy and improve their economic well-being.

He said the exercise will go a long way in allowing rural farmers evacuate their produce to the urban areas for maximum benefits.

The event was witnessed by the Deputy Speaker of the Imo State Housde of Assembly, Rt. Hon. Amara Iwuanyanwu, the Secretary to the State Government, Chief Cosmas Iwu and some members of the expanded executive council of the state.