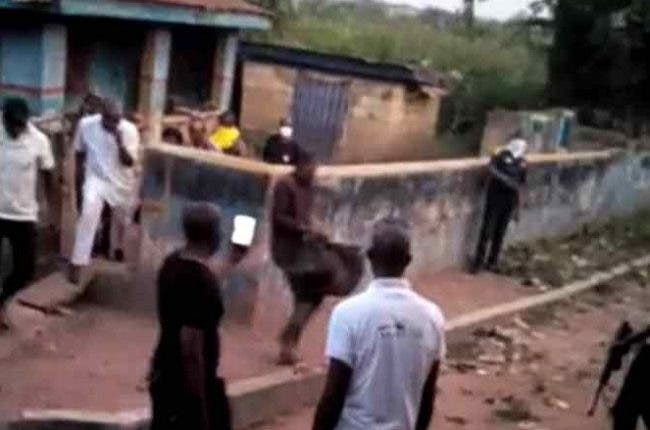 Scene of the discovery in Osun state

A dramatic incident has left residents of Osun in shock following the discovery of six fresh human heads and a decomposed body of an unidentified woman in the house of a vulcanizer.

Angered by the discovery, residents of Iwo in Osun State on Monday razed the house of a vulcanizer identified as Monsuru who resides at Yemoja area of the town.

According to Nigerian Tribune, the incident which occurred on Monday evening was said to have stunned residents of the community.

The vulcanizer, however, escaped being lynched by the irate mob during a prompt intervention by the police.

Tribune Online gathered that the alleged ritualist has been operating the den for six years.

Eyewitness account further revealed that the police got to know about the incident following a tip-off from the people living around the vicinity.

A police officer who preferred anonymity told our reporter that it was the tip-off of people living around the area that led them to the scene.

He, however, assured that police would get to the root of the matter.

Calls put across to the state police command public relations officer did not go through as at the time of filing this report.