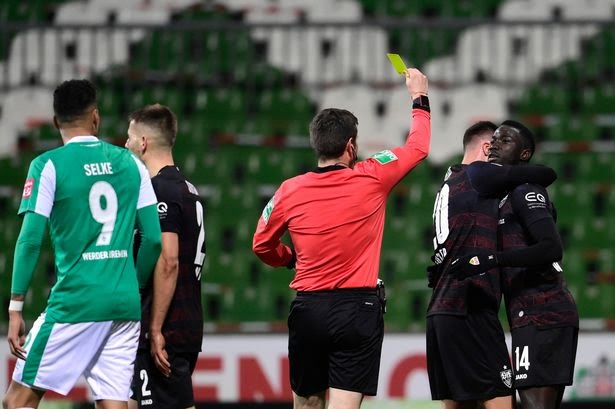 Outrage As Top Footballer Is Booked For Scoring A ‘Disrespectful Goal’

A referee has left many people protesting on social media after booking a footballer for scoring a ‘disrespectful goal’.

Silas Wamangituka pounced on a defensive mistake by Werder Bremen to score Stuttgart’s second goal in a 2-1 win in Germany’s Bundesliga.

After taking the ball off the opposition goalkeeper Jiri Pavlenka, Wamangituka proceeded to walk the ball towards the goal in an exaggerated fashion before blasting it in the net from on the goal line.

But as he turned to celebrate with his teammates, he was confronted by furious Bremen striker Davie Selke, before the referee brandished a yellow card for unsportsmanlike conduct.

Many football fans responded angrily to the decision, claiming the referee overreacted.

One tweeted: “Referee needs sacking. How the hell can that be a yellow card?!

“I can’t believe he’s just accepted the booking, I’d have been raging if I got booked for that.”

Another added: “Why did the ref give him a yellow card? I thought this was the entertainment industry.”

A third said: “He didn’t do anything wrong? If anything the Bremen 9 (Davie Selke) should be booked for squaring up to him.”

Other viewers agreed Werder Bremen star Selke should have been the one shown the yellow card for confronting Wamangituka.

Stuttgart defender Marc Oliver Kempf was full of praise for goalscorer Wamangituka despite his controversial antics.

He said: “Silas brings a lot of enthusiasm, physical strength and pace. He always manages to create space and danger.

“It makes it all the nicer that he managed to help us with his two goals today.”

Some football fans suggested that Wamangituka being booked for “not scoring quickly enough” is no different to players who take the ball towards the corner flag in an attempt to waste time.

“He should have simply put the ball over the line and celebrated his goal instead of loafing around like that.”