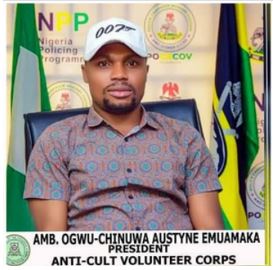 Tragedy As Anti-cult Activist Is Killed By Cultist In Delta

The leader of Anti-Cult Volunteer Corps in Ndokwa West Local Government of Delta State, Austine Chinua-Emu has lost his life after he was shot by unknown gunmen.

The 38-year-old father of three was allegedly shot about 7.30pm on Saturday December 3, while returning from a meeting in Kwale.

He was reportedly killed after being invited for a meeting with a top politician who was also meeting a group of youths allegedly belonging a cult group, at the same time.

Though it is unclear why Chinua-Emu was murdered, it was however learnt that he helped to stop the atrocities of rival cult groups trying to outwit one another.

A source who spoke to The Nation said;

“Former Commissioner representing Ndokwa west in the Board of DESOPADEC invited Chinua-Emu for a meeting at his house, unknown to the deceased that the same man was hosting some cultists.

“More than 60 members of the Black Axe were at the meeting. But as Chinua-Emu drove out after the meeting, the cultists shot him.”

Police spokesman, Onome Onovwakpoyeya who also confirmed the incident revealed that they are already conducting an investigation.

The State Commissioner of Police Hafiz Inuwa condemned the killing and appealed for calm. He wrote in a Facebook post;

“I write to express my deepest condolences on the death of Austine. He was with me in my office till Friday evening and we planned to meet this week again. We laughed and had fruitful discussions that day before enemies of the state snuffed life out of him yesterday.

“Please nobody should take the law into his/her hands. I assure you that those who murdered our friend and working colleague will know no peace until they are arrested, investigated and eventually charged to court. Austine deserves justice and those who perpetrated the act must be brought to justice.”