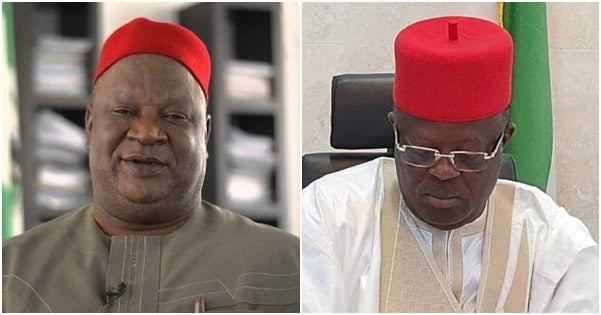 Ebonyi State governor, David Umahi has sacked most of his political appointees from Ivo LGA, where former Secretary to the Government of the Federation, Senator Pius Anyim hails from.

Anyim is from Ishiagu community in Ivo.

The sack, which was announced by Government secretary, Kenneth Ụgbọala, comes barely 24 hours after Anyim wrote an open letter to Umahi, alleging a plot to kill him.

Ụgbọala said the sack was informed by the Governor’s decision to ensure inclusiveness in governance.

The statement directed them to handover all Government Property in their possession to the Secretary to the State Government and Coordinating Commissioner by the close of work today, 2nd December 2020.

Umahi had last Thursday sacked Coordinators of Ivo and Echiele Development Centres for allegedly refusing to sign a communiqué against Senator Pius Anyim.

Anyim and Umahi were political allies before now, until Umahi decamped from the Peoples Democratic Party to join the all Progressives Congress.

Umahi had said Anyim, senators and reps members in the state were privy to his political switch. And they were supposed to dump PDP like he did.

However, he was the only political force that went to the APC.