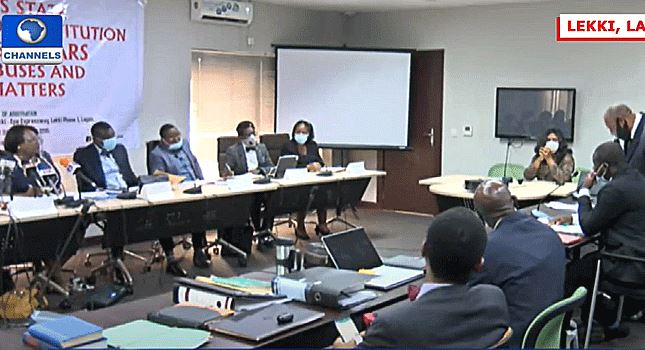 The woman testified against the police, saying she was brutalized by officers simply for recording the violence that took place during one of the protests in the Surulere area of Lagos State.

She said this on Friday while narrating her ordeal to the Lagos State Judicial Panel of Inquiry and Restitution.

Okpara told the panel that she had just concluded an interview in the area and was heading back home when she saw the protest and decided to join.

Shortly after, she heard gunshots and people started scampering for safety.

According to her, after running towards a police station, she decided to record the incident but was accosted by a police officer who asked why she was recording and ordered her to stop.

Refusing his orders, the said officer pulled out a gun on her while another joined in and both forcefully dragged herself and another lady to the police station nearby.

On getting there, several officers including women started beating and punching them. According to her, the beating was so much that she lost control and urinated on herself.

“While the beating was going on, I lost control of my body and my phone fell on the ground and one of them used his leg to smash it because he believed I was recording with it and I was going to pot it on the internet.

“While we were still at that gate, some were coming out, they joined the beating. Dragged me inside, that was where I lost control of my body, I peed on myself. I managed to get a hold of the phone because I knew that was the only thing I had,” Okpara said, fighting back tears.

Watch the full video of her testimony below.