Sadiya Umar Farouq, Nigeria‘s Minister of Humanitarian Affairs and Disaster Management, has been involved in an altercation with a fellow minister, a report by SaharaReporters has shown.

Farouq was on Wednesday involved in a heated argument with her Communications and Digital Economy colleague, Isa Ali Pantami, during the weekly Federal Executive Council meeting at the Presidential Villa, Abuja.

The disagreement between the two ministers, according to a top source, has further confirmed insinuations that there was division among top aides of President Muhammadu Buhari.

SaharaReporters gathered that trouble started after Pantami presented his ministry’s planned activities for approval, which included the mapping and registration of Internally Displaced Persons across the country.

Immediately after the Communication Minister’s submission, a furious Farouq raised her hand to speak and exoress objection to the approval for such activities pending review and approval from her ministry. 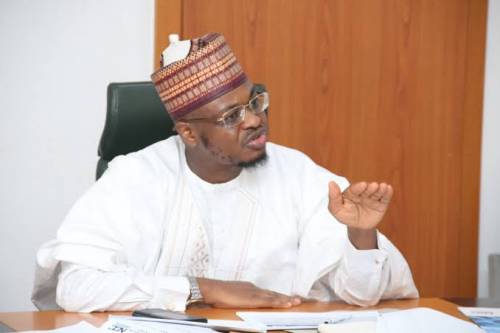 It was learnt that the President was inclined to agree with Sadia, considering the supervisory role of Ministry of Humanitarian Affairs on IDPs but Pantami strongly objected to the opposition of Farouq, reminding her of the statutory power and role of the National Identity Management Commision in capturing and registering citizens, IDP or not.

The Communication’s Minister broke the camels back when he flaunted a letter written by his ministry to Farouq’s office on October 15, 2020 with no response a month after.

It was at this point that the President went ahead and approved the memo from Pantami, granting the go ahead from NIMC to capture the IDPs.

SaharaReporters gathered that Farouq, who had always used her closeness to President Buhari to intimidate, manipulate and harass her fellow ministers was humbled.

A source said the ninister openly wept immediately after the meeting, accusing Pantami of disgracing her before the President and other colleagues.

“Farouq is very afraid, she has this fear that the capturing is capable of exposing the corruption usually perpetrated in the name of IDPs,” the source said.