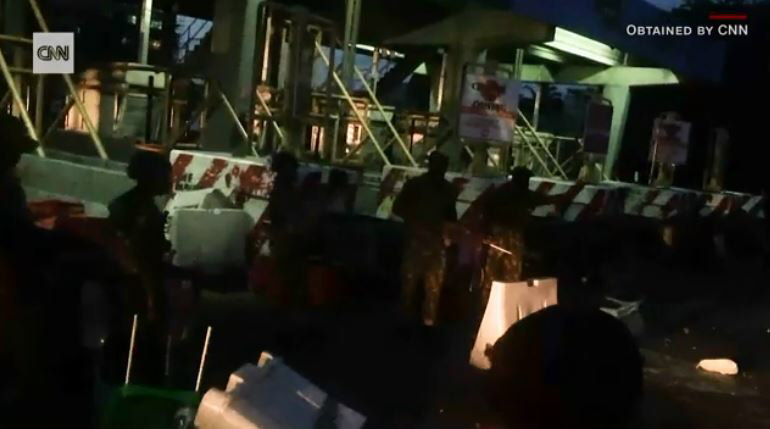 CNN has shared new clip showing soldiers firing at protesters at Lekki toll gate on the 20th of October, 2020.

The new video CNN obtained comes after the government continued to deny that soldiers shot at protesters.

The footage from the security camera overlooking the toll gate in Lagos, Nigeria was played during Saturday’s session of an eight-person judicial panel set up to investigate police brutality and the now-disbanded Special Anti-Robbery Squad — the primary focus of thousands-strong protests in the city that lasted for almost two weeks in October.

The panel is also charged by the Lagos State government with probing the shooting of protesters at the Lekki toll gate on the evening of October 20 and into the early hours of October 21.

CNN obtained a copy of the CCTV footage ahead of the panel’s sitting on Saturday and matched it up to verified footage published as part of an investigation last week into the events at the toll gate.

The footage corroborates the timings CNN reported for the gunshots fired by the army. It also shows soldiers approaching protesters and firing shots.

What is perhaps most notable is what’s missing.

At 6:47 p.m., the moment when CNN has video of the army appearing to fire directly at protesters, the surveillance camera pans away from the area.

The Lekki Concession Company (LCC), the firm that operates the toll gate in a public-private partnership, says its staff were sent home before an evening curfew, imposed by the State’s Governor, came into effect.

The surveillance camera pans left and tilts up before reframing and struggling for focus. It is unclear if the camera pans away deliberately or whether the pan away is a poor choice by the CCTV operator.

The LCC had previously testified at the panel on November 3 that the recording stopped at around 8 p.m. because it was tampered with.

The surveillance footage once again raises questions about the investigation into what happened at the Lekki toll gate protest — and why surveillance video from the evening does not provide a more complete picture.

On Monday, the UK parliament debated a petition seeking to sanction the Nigerian government and the Nigeria Police Force (NPF) over alleged human rights abuses.

The foreign office also released a statement saying: “The Foreign Secretary has been clear that the Nigerian government must urgently investigate reports of brutality at the hands of the security forces and hold those responsible to account.

“It is important that the police in Nigeria respect human rights. We have been working with Nigeria to support reforms to ensure this happens.”

The police said it would not comment until after the judicial inquiry. However, in a tweet in early November, it denied shooting at protesters.

“…our police officers never resorted to use of unlawful force or shooting at the protesters as alleged in the report.”

Since the shooting, which brought an end to the protest movement in Africa’s most populous country, the army has made many shifting statements about how it engaged with the peaceful demonstrators.

somebody’s brain and stay there and send him to a coma, killing him?”

CNN has not been able to independently confirm the death of this person.

On Saturday, Brigadier Taiwo once again rejected any responsibility by the army for deaths of protesters, saying that one of the deaths was from “blunt force trauma to the head on Admiralty Way … 3 kilometers away from the Lekki toll gate. And the second person at Yaba.”

“It had nothing whatsoever to do with the Lekki toll gate,” he said.

In response to CNN’s investigation, the Nigerian government said the news organization should be sanctioned and alleged that doctored videos were used, describing the reporting as “fake news” and “misinformation.”

CNN stands by its investigation, a company spokesperson said.

“Our reporting was carefully and meticulously researched, and we stand by it,” the spokesperson said via email.

In a letter addressed to CNN on November 23, Nigeria’s Ministry of Information demanded an internal investigation into CNN’s reporting, as a “form of remediation” and to “determine whether it met the basic standards of journalism.” The Minister added in the letter that the “Federal Government reserves the right to take any action within its laws to prevent CNN from aggravating the #EndSARS crisis.”

CNN’s November 19 report included photos and videos of gunshots, the wounded, and victims. The videos, acquired from multiple eyewitnesses and protesters, were verified in interviews, and by using timestamps and other data from the media files.

Ogunlana, the lawyer representing some of the protesters, said the evidence the army continues to submit to the judicial panel is undermining its defense.

“There’s a proverb among my people,” Ogunlana said. “They say the wasp is in denial, the big black ant known for his terrible sting is in denial, but here is the face of the farmer, so badly swollen.” 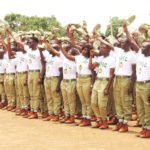 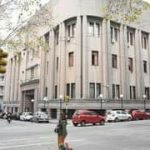 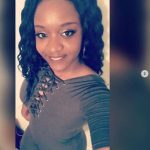 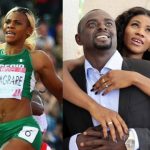