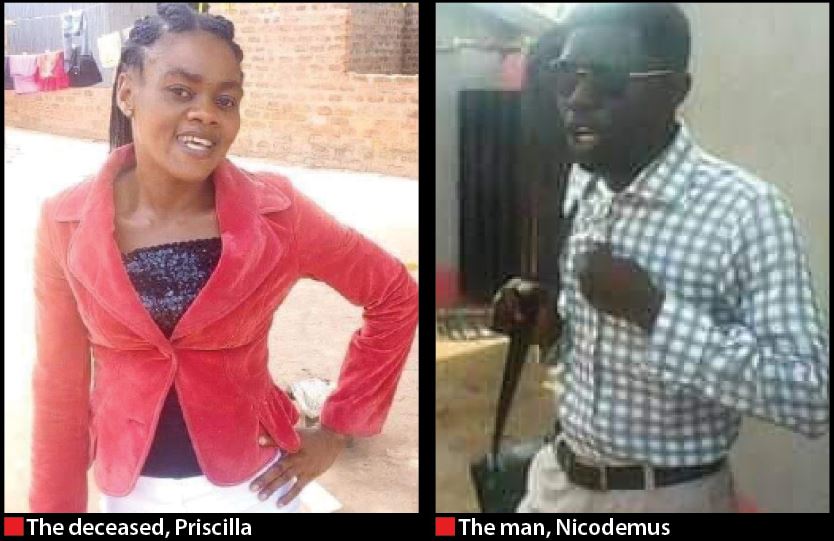 More details have emerged about the married man, Nicodemus Nomyange, who set himself and his girlfriend on fire in Benue state.

The Holy Bible in the book of Jeremiah 17:9 says, “the human heart is the most deceitful of all things, and desperately wicked. Who really knows how bad it is?” Little wonder Nicodemus Nomyange, popularly known as Nico, succinctly achieved his evil plot without batting an eyelid or being suspected by his victim Priscilla Shiminenge Pam.

It will be recalled that Nico had last Saturday doused fuel in a room and set himself and his girlfriend Priscilla on fire, which led to their death.

According to Daily Trust, Nico, said to be in his 40s and a staff of a Guest House in Makurdi, had set himself and his girlfriend ablaze over the lady’s refusal to his marriage proposal.

The incident occurred at about 5pm in the unsuspecting lady’s residence while she was cooking dinner for her ex-lover.

It was learnt that trouble started when the lady told Nico that their relationship could no longer continue because she was set to marry someone else since Nico was already married.

The development was said not to have gone down well with Nico who severally threatened Priscilla and even assaulted her on few occasions and eventually stopped visiting her, which paved way for her new relationship to blossom.

Witnesses said Nico – a father of three children who hailed from Mbaton-Abeda in Logo Local Government Area of the state, went to his village and divorced his wife in a desperate bid to convince Priscilla of his intentions of marrying her. But the lady wouldn’t bulge as she stuck to her new found man.

A neighbour of the deceased lady, Sunny Paul, who narrated the incident to Daily Trust Saturday, said “I noticed the lady was in her room while the man sat outside; we all know him in the compound so his presence didn’t raise any dust. The man came and appealed to her to cook something for him to eat. She told him that there were no ingredients in the house and that the only money in her possession was meant for her church dues but he compelled her to use the money and that he would pay back.

“So, she set yam to boil (as you can see traces of the yam littered everywhere) and went to a nearby shop to buy okra by which time the man also went out and returned with a 10-litre gallon of fuel.

“As soon as she returned and entered the room, I heard her scream in Tiv language, calling for help. When I ran to her door step, alongside other neighbours, we discovered that the door was locked and the man had soaked the room, himself and the lady with the fuel. In a bid to save them, we broke the door and at that point, the man lit the matches in his hand and the fire overwhelmed them.

“We (neighbours) became helpless; we couldn’t help them any longer as we turned our attention to saving the entire building from being overtaken by the fire,” he said.

Ajagua, who spoke to Daily Trust at the premises of Millennium Guest House where they (Ajagua and the deceased) both worked until the unfortunate incident happened, said he still could not come to terms with the actions of the late man.

Ajagua said he was with the deceased until 12 noon on that fateful day and had no inkling of what his friend was up to. He said the deceased had called Priscilla to tell her that he would be at her house, not far from the hotel, and that she should prepare him food to eat.

“It’s really sad. It was purely an act of wickedness because he was not mentally unstable as some people alleged. He simply went to her house and did the unimaginable,” he said.

Ajagua further told our correspondent that he had accompanied the deceased man to his village about a month ago to divorce his wife on account that he wanted to marry Priscilla, who had consistently maintained that she would not marry him.

A nephew to the late Nico, Kelvin Numyange, said he knew his uncle with the lady for a long time.

Kelvin said though he does not live with his uncle, he however visited him frequently to help out with domestic chores, noting that on the particular day, the deceased had called him to come and assist with laundry.

“I saw when he took the gallon to buy fuel. He told me he was coming back but I noticed that he’d been pensive for some days before the incident.

“I came and washed clothes for him as usual. But before he left, he told me his account number, showed me how to unlock his phone and left the handset with me, only for me to hear the sad news moments later,” Kelvin added.

At the Lobi Hospital where the late Priscilla worked, staff are still in shock even as they described the deceased as a good fellow. Nancy Orave, an attendant at the hospital, said the late nurse was a very lovely lady who was loved by all.

The landlord of the burnt house, Charles Akimbo, was however quoted in a local tabloid as saying that the incident was unfortunate. He appealed to government and good spirited individuals to assist him repair the damaged structures as that remains his only source of livelihood.

Priscilla, who hailed from Kwande Local Government Area of the state, was said to be planning for her 35th birthday celebration in December, alongside her wedding, before her untimely death.