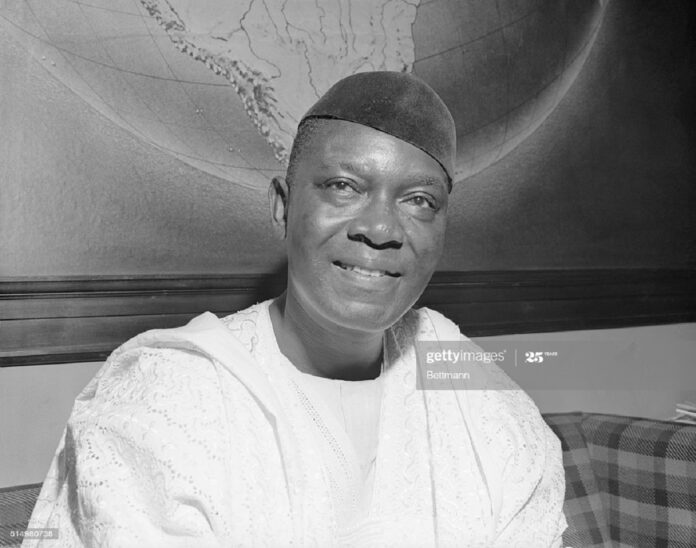 A social comentator, Odinigwe Charles Aduba has described the desecration of the statue of Nigeria’s first Presidnt and Owelle of Onitsha, Late Dr. Nnamdi Azikiwe during the recent nationwide EndSARS protests in Onitsha, Anambra state as sacrilege of the hghest magnitude.

He lamented that the way and manner some hoodlums pounced on Zik’s statue during the protest on Wednesday, October 21, 2020 at Dennis Memorial Grammar School, DMGS Roundabout showed the level of malaise, debasement, indecency, hopelessness and madness in our present society.

According to Aduba in a press statement issued in Onitsha, yesterday, “Where did Zik of Africa, a father of the Nation, quintessential Nationalist, politician par excellence and a most patriotic Nigerian go wrong?”

“Nnamdi Azikiwe lived for and died for Nigeria first and foremost, then Igboland and Onitsha in that order. The animals that tried to deface Zik’s statue should hang their heads in shame throughout the days of their miserable lives on earth”.

“If they wanted to destroy statues of prominent Nigerians in Onitsha, why only that of Zik? Was this action a hidden agenda and vendetta against the Onitsha people who had provided a platform for economic prosperity of Ndigbo sons and daughters from time immemorial till present era? The implications of this unwarranted sacrilege will remain with us long after the event”.

He contributed more than most others in placing Igboland on a high national/international pedestal. He was a detribalised Nigerian who believed in dialogue, diplomacy, tact, reconciliation, mutual love and unity in diversity. Zik knew that more would be achieved by Nigeria as a unified entity than as divided entities. Till date, he had not been proved wrong.

Zik’s monumental achievements realised in Igboland cannot be erased, downplayed or politicised. University of Nigeria, Nsukka was established as the first indigenous university in 1960 by Nnamdi Azikiwe through his position as Nigeria’s Governor-General. No state, town, village or family in Igboland in particular and Nigeria, Africa and universe in general has failed to benefit from this citadel of learning. How could such a man be seen as a part of Nigeria’s problems? The mind boggles.

Nigeria-Biafra Civil war of  1967 – 1970 was brought to an end by Zik to a great extent. He strongly advised against going to war because the Igbo were not prepared for war. Those that clamoured for war then were ill-informed and those still clamouring for it today are also ill-informed because war is an ill-wind that blows nobody any good.

If Zik did not intervene, more casualties would have been recorded and who knows whether the miscreants that desecrated his statue would have been born in the first place.

African Continental Bank (A.C.B.) was established by Zik for the interest of the Igbo people. The number of businessmen and women that benefitted from this bank remain uncountable. How can a sane person stoop so low to desecrate the statue of such a great Igbo son in the name of #EndSARS Protests?

Where actually are we going as a tribe? Is it a society where lies, hatred, disrespect, anarchy, discrimination, criminality, senselessness and suspicion reign supreme? Will Igbo presidency be a reality in 2023 in the presence of an atmosphere of bickering and mudslinging? As a rhetoric question, no answer is needed here.

Food for thought: An African adage states that any bird dancing on the pathway is receiving its music from the bush. The never-do-wells that desecrated Zik’s statue may be imported thugs from outside Anambra State because no right thinking Anambrarian will consider Zik as part of Nigeria’s problems.

What goes round comes round and what one sows, he reaps. The evils that men do live with them and their generations to come. In the case of Zik, this atrocity will bring endless woes to perpetrators all their living days.

Indelible legacies that Nnamdi Azikiwe left during his glorious lifetime cannot be forgotten forever and ever. Where does one start? His face on Nigeria’s second highest currency (N500) was not a mistake but in recognition of his uncommon achievements. Nnamdi Azikiwe International Airport at Abuja was a testimony to his greatness. How about Nnamdi Azikiwe University at Awka? Is there any major city in Nigeria without a street, avenue, crescent named after Zik? There is none.

Nnamdi Azikiwe Stadium at Enugu is a stark reality just like Nnamdi Azikiwe University Teaching Hospital, NAUTH, Nnewi. One can go on and on. Recently, the amiable Governor of Anambra State, Dr. Willie Obiano had been clamouring for Zik’s birthday on November 16 to be declared National Public Holiday in view of Nnamdi Azikiwe’s stupendous contributions to National development.

Nnamdi Azikiwe was a rare gem, a colossus, a trail-blazer and much more. He impacted on the lives of Igbo people home and abroad from time immemorial. To turn on such a man at this point in time shows that man does not learn anything from History.

This shows the level of decay in our educational system where History is no longer taught effectively. If not for this anomaly, no sane person will pinpoint Zik as a problem of Igbo people in whatever ramifications. To all practical purposes, Zik was part of Nigerian and Igbo solution and progress.