Davido bought the diamond necklace for his daughter, Hailey

Musician, Davido has been condemned for spending millions on a diamond necklace he gifted his daughter, Hailey.

He was slammed by controversial Nigerian journalist, Kemi Olunloyo on Twitter.

Recall that, few days ago the father of three, took his second daughter, Hailey Adeleke on diamond shopping in a jewelry shop in Atlanta.

The DMW boss, took his 2 year-old daughter to the jewelry shop were he usually shops his diamond piece, and asked the little girl to pick whatever she wants.

The overly excited father told assured his beautiful that he’s very rich and can afford anything she chooses.

“Money dey. Your daddy is rich. Tell them. Say my daddy gat money”.

However, Kemi Olunloyo has now criticized the singer for spending so much on a necklace for the young girl, and making the video public. 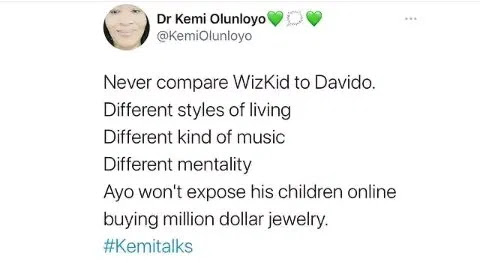