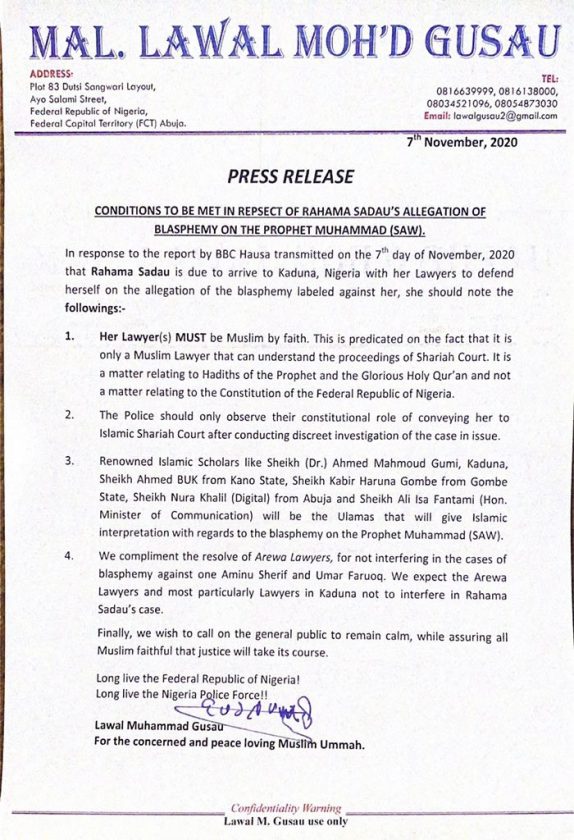 Kannywood embattled actress, Rahama Sadau has been charged for Blasphemy over indecent photos on social media.

BREAKINGTIMES reports that Sadau will be appearing in a sharia court in Kaduna over allegations of blasphemy levelled against her.

She is allegedly under police investigation after the racy photos she shared triggered blasphemous comments.

This online news medium gathered that the investigation is linked to the blasphemous comment on the Holy Prophet Mohammed the racy photos incited.

A press release signed by Lawal Muhammad Gusau on behalf of the Concerned and Peace-Loving Muslim Ummah, listed some conditions that must be met before she defends herself in the sharia court.

BREAKINGTIMES understands that penalty for blasphemy is “Death”.

@MrOdanz wrote: “Rahama Sadau is not facing any death sentence please. In our quest for a just society, we should try to tone down the sensationalism.”

@TheAdaaa wrote: “Rahama Sadau is facing sharia law? You guys it’s time for us to fight this. Let’s not allow it grow on us before it becomes one of our multiple problems. We need to kill it before it gets worse. Thing about oppression is if we keep quiet, it’ll grow to swallow all of us.”

@zeezish_ said: “There’s no where it’s written in the Quran or said in any hadith of the prophet that anyone should be killed or prosecuted for indecent dressing. Whatever the people in the north do to Rahama Sadau is entirely non-Islamic.”

@PreciousCheee wrote: “Rahama sadau should just convert to Christianity and have peace, or what’s so hard about it”