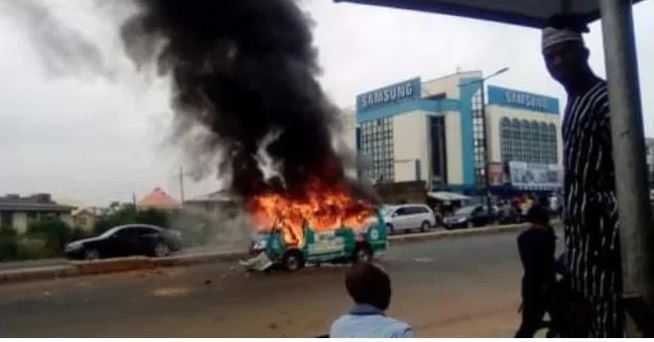 Some angry youths have set a commercial bus on fire after the driver allegedly killed a motorcyclist in Ibadan on Wednesday, Nov 4.

The News Agency of Nigeria (NAN) reports that the accident occurred at Idi-Ape area of the city.

Uche Chukwurah, the Sector Commander, Federal Road Safety Corps (FRSC) in the state, confirmed the incident in a telephone interview with NAN in Ibadan.

Mrs Chukwurah said that the accident involved a bus, a car and a motorcycle.

She further stated that the eight people were involved in the accidents, out of whom only the motorcyclist died, with none sustaining an injury.

The sector commander said that the accident could have been caused by brake failure, adding that this prompted the angry youth in the area to set the bus ablaze.

An eyewitness told NAN that the bus driver immediately took to his heels after the incident, adding that this angered the youth, thus forcing them to set the bus ablaze.

The eyewitness said that the bus driver was initially driving on a particular lane before crossing to the other side of the road as a result of brake failure to hit the deceased.