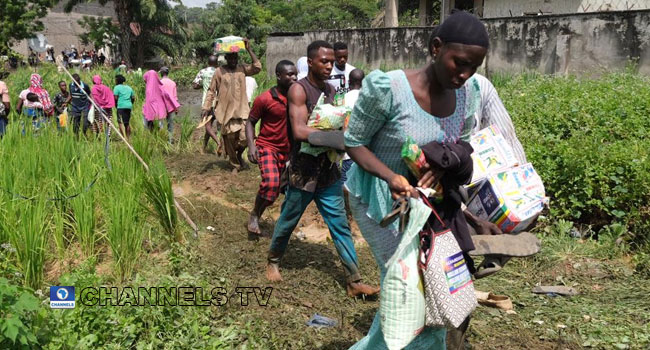 The giant warehouse was said to have been discovered overnight by the COVID-19 palliatives hunters, after the boasts by FCT Minister of State, Ramatu Aliyu that it could not be found.

On discovering the store, some of the hoodlums climbed fences from adjacent compounds near WAEC office while others fought their ways through the back of Fidelity Bank premises.

Parts of the roofs of the warehouse were broken to provide access into the hall.

According to The Nation, personnel of the Nigeria Civil Defence and Security Corps, the Nigeria Police and the Brigade of Guards of the Nigeria Army, who arrived the venue early, blocking the roads with their vehicles, were overpowered.

They watched helplessly as people made away with the COVID -19 palliatives.

The looters were heard saying: “This is our money. These people are wicked to have hidden these products and refused to share them.”

By 11.23am, some reinforcements of security operatives forced their ways into the massive warehouse, which had COVID 19 written on it and shut it down.

They however did not use tear gas or fire any shots, which could lead to stampede and more deaths.

The FCT Minister, Malam Muhammad Bello has ordered the arrest and prosecution of the people who break the FCT warehouse in Gwagwalada Area Council and looted the food items in the store.

Bello gave the order during an emergency security meeting with leaders of various security agencies in the city, on Monday in Abuja.

The minister, who asked those who looted the food items to return them immediately, ordered massive deployments of security men to safeguard factories and warehouses in Idu Industrial District of the city.

”What is going on is was no longer #EndSARS protest but broad day stealing by hoodlums,” he said.

Aliyu said no nation could survive without a food reserve which are being looted across the country.

She called on Council chairmen and Royal fathers to reach out to opinion moulders unite the people against looters.

Royal fathers who spoke called for decisive actions to be taken against those looting across the city.

They said hoodlums are beginning to enter markets shops and personal business premises.

Present at the meeting are the Permanent Secretary, FCTA, Mr Olusade Adesola, FCT Commissioner of Police, Bala Ciroma, Brigade commander, Chief of Staff to the minister amongst others