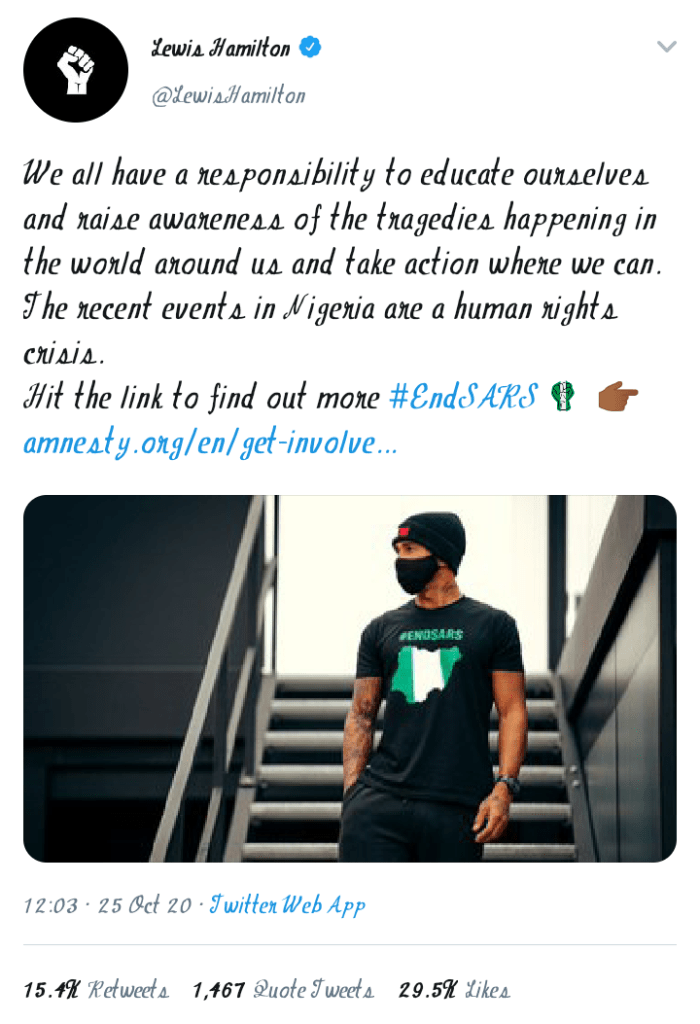 British racing driver, Lewis Hamilton has condemned the recent happenings in Nigeria, describing it as a “human rights crisis.”

In a tweet, on Sunday, the formula 1 star wrote: “We all have a responsibility to educate ourselves and raise awareness of the tragedies happening in the world around us and take action where we can. The recent events in Nigeria are a human rights crisis.”

In Nigeria, civilians have been extorted, raped, tortured, and killed by police officers from the Special Anti-Robbery Squad (SARS).

Protests forced the Nigerian government to finally put an end to SARS. But it’s not enough. Victims of these crimes are still waiting for justice.

People across Nigeria and Nigerians living abroad are standing together in protests calling for an end to the assault, torture, extortion, and unlawful killings by SARS Officers.

The Nigerian authorities were forced to disband SARS. Now, protesters are demanding true police reforms and the prosecution of SARS officers who have perpetrated human rights violations.

SARS officers are infamous for unlawful killings, extortion and torture. For years, human rights organizations and the media have documented cases of extrajudicial killings, torture, and other ill-treatment committed by SARS officers.

Survivors of SARS officers’ abuses have risked everything to tell their stories and seek justice, while the loved ones of those who have died do the same.

The cases of brutality have prompted Nigerians to call for a reform of police through protests and campaigns.