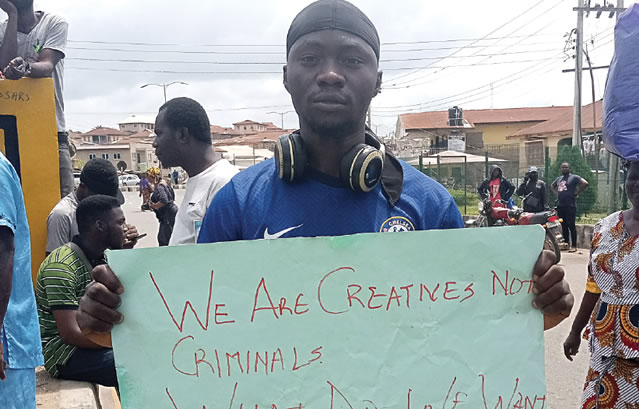 In this interview with The PUNCH, a final-year student of the Obafemi Awolowo University talks about the experience he had with SARS men.

Can you tell us about your encounter with SARS?

I am Olayiwola Mayokun, a student of Philosophy at Obafemi Awolowo University, Ile Ife. I am already in my final-year and I should have left school, but for the closure occasioned by the COVID-19 pandemic and the strike by the Academic Staff Union of Universities. I have had many encounters with the state and federal SARS in the past. The last one I had happened in Ife a few years ago. It was very pathetic. They arrested me for no justifiable reason and kept me in a cell overnight. They made me miss my examination.

I was going to school that afternoon to write an examination. I was walking along Aserifa road towards the campus gate when they accosted me. They were about four at the checkpoint and they asked for my phone. I told them the phone was not with me because I was going to school to write an examination. We don’t go into the examination hall with any gadgets. After listening to my explanations, they said I looked like a bad boy. That sounded very funny initially, because I thought one of them that said that was merely joking with me. I was even laughing.

The leader of the team gave me a hot slap and ordered me to enter their van. They said I should take them to my house but I refused. Doing that would not allow me to meet up with my 4pm examination. I was scared because missing the examination might lead to an extra year for me. They eventually drove me to Moore police station in Ile Ife. I was detained in the cell till the following morning. I could not write the examination that day. It was a computer-based test. I have names of those that arrested me and I can still recognise them.

What happened during your detention?

I was forced to write a statement claiming that I was in possession of Indian hemp. I was allowed to call my parents and could not believe it when they talked my parents into buying their story that I was in possession of weed. That really saddened me. My parents were made to pay N30,000 for my bail. The guy that forced me to write a statement was not even there at the point of my arrest.

Who were those that arrested you on that particular day?

They were SARS men, though they were not wearing any uniform and they didn’t come with a police van. During the period, SARS men usually move in a wine Toyota Corolla car and a black van. Every student in Ife knows these vehicles. If you come across them, you must flee because they symbolise danger.

What did you do after you were released?

I met the woman in charge of the examination and I narrated my ordeal to her. I was later allowed to write the exam. This is not all about me. Many of my friends, family members, relatives and other people at different times had encounters with SARS men that led to sad experiences.

How did you handle the trauma after you regained freedom?

The trauma was initially much. It was very serious. But I had to move on after the whole saga.