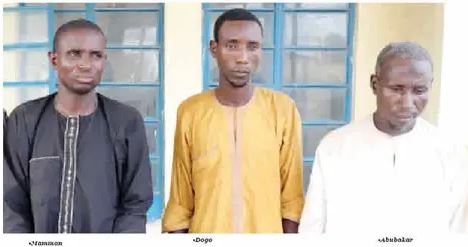 A Nigerian who engages in the wicked act of digging up dead bodies for money has told the shocking story of how he got his friends involved in this unbelievable interview with Saturday PUNCH.

Abdullahi Dogo (30), Suleiman Abubakar (50), Babuga Mamman (42), and Abubakar Abdullahi (31), of Sabon Pegi village in the Mashegu Local Government Area of Niger State were recently apprehended by the state police command for allegedly being in possession of a human head. Dogo tells ENYIOHA OPARA that the buyers had contracted him to get the human head from the graveyard for N2m

What do you doing for a living?

I am a cattle rearer. I look after somebody’s cows but the money I receive at the end of the month is not enough for me to look after my young ones. Since our parents died, we have not be finding life easy to the extent that we cannot boast of two square meals daily. So, when the business of getting human parts came, I had no option but to join in, so that I can take care of my younger ones. I even have a little shop where I sell provisions but it’s not helping at all.

Who contracted you to get a human head before you called others to join you?

I was contracted to do this assignment by Nasiru of Koko, Kebbi State and one Muhammadu of Sabon Pegi in Mashegu Local Government Area. They told me to go to the graveyard in Kanti village and get a human head for them for ritual purposes and promised to pay me the sum of N2m when delivered.

But when I found out that I could not do it alone, I invited three of my friends to join me. From the start, I told them that the buyers would pay N2m, if we succeeded in getting the head and it was a welcome idea. Hence, all of us swung into action and we headed to Kanti graveyard to get the head. Unfortunately for us, we were arrested by police operatives attached to Ibbi Division, following a tip-off when we were leaving the graveyard on October 3, at about 5.30am.

How long have you been getting human parts to your buyers?

Honestly, this is the second time I have been involved in this wicked act. Some of my buyers have my number to reach me whenever they need any part of a human being. In fact, I have been in this business for almost one year and I can tell you that it was hardship that pushed me into this hopeless predicament. Nothing is moving in this country, so I have to do anything I can to survive and pay my bills, but it was unfortunate that we were caught eventually.

Were your accomplices into this business before?

No, they were not part of this business. They are just my friends and I felt I could share the N2m with them if the buyers paid. I feel sorry for what I have made them go through. They may be bad people but I don’t want to say that they are ritualists. It was I who dragged them into this mess. I told them about the business and they willingly joined me to accomplish the deal.

My worry now is that we have not been paid for this assignment. Nasiru and Muhammadu were nowhere to be found. The other suspects are in police custody with me. We have committed a heinous crime that cannot be forgiven.

My   name  is  S uleiman  Abubakar,
How did your friend, Abdullahi Dogo, convince you to join him?

He first called me that he wanted to see me to discuss business and I told him to meet me at my place, since we are from the village, Sabon Pegi in Mashegu LGA. He told me about two buyers of the human head who needed it desperately for ritual purposes and he had agreed with them to pay N2m after the exercise. After discussing with him, I gave him my word that I would be part of it but reminded him that it was a risky task to be accomplished. However, I never knew that the long arm of law would catch up with us. Now, all of us are suffering it and we deserve any punishment meted out to us. Let the law take its course.

Why did you accept the offer from him?

We all know the condition of the country, coupled with the COVID-19 pandemic that has affected the economy of the country and the world in general. Actually, I accepted the offer because I didn’t have money to take care of my family, especially now that bandits do not allow us to go to farm; nothing is working. Honestly, I can tell you that it was hunger that pushed me to be part of this crime.

Is your family aware that you are in this illegal business?

My family is not aware of this. How can I tell them that I am into ritual business? As I speak, my family does not know my whereabouts. It is unfortunate. I don’t think they will forgive me. I can’t even remember how it happened in the first place; going to our village graveyard to exhume dead bodies is the worst offence I have committed in my whole life. My concern now is how to tell my wife and my children. Where do I start? They will not forgive me. I am ruined. Even my kinsmen will not accept me back, knowing full well that I have done a bad thing against my religion, Islam. I think they will banish me for this singular act.

I already planned how to spend my share –Suspect

WHAT is your name?
My name is Babuga Mamman
Where were you when Dogo called you to join him in this business?

I was in the village when his call came in, asking me to join him at a particular spot very close to Kanti graveyard. I rushed there immediately and he told me about the business. I assured him of my cooperation, provided the money would be shared equitably. When we swung into action, we got the head demanded by the buyers. As we were coming out of the graveyard to go and deliver it to the buyers, we met our Waterloo, as we were rounded up by police operatives attached to Ibbi Division in Mashegu council, following a tip-off.

When you were arrested, what was your feeling?

I felt bad that, one, I would not get the money again and, two, because I was going to pay for it dearly. I was thinking it was a setup by my friend, Dogo. But I later realised that all us were in for it. When we were at the graveyard, I thought nobody saw us and I was already planning what to do with my share of the N2m, but it did not work out.

How long have you been in this business with Dogo?

This is my first time. I have not been involved in this kind of business. I am a local farmer in my area but have stopped going to farm because of security challenges ravaging our community. A lot of people have stopped farming for fear of being killed by the bandits, so in the village, we do all kinds things to survive. When Dogo brought this business, I found it difficult to resist because I didn’t have money even to provide a meal for my family.