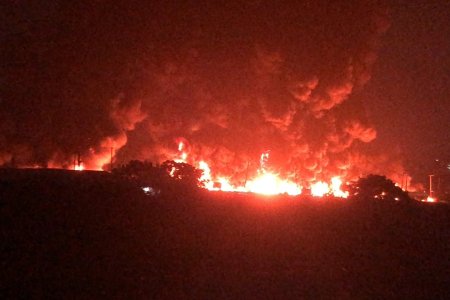 We learnt that the tanker explosion occurred at around 2 am on Saturday morning, and the fire from the explosion is already spreading and destroying properties.

The cause of the explosion is still unknown at the time of filing this report, but an eyewitness said that the Lagos State Fire Service were seen at the scene battling to put out the fire.

Watch the videos from the scene below:

Video showing the tanker explosion that is happening on Otedola bridge pic.twitter.com/4C7zggDRnq

Tank Explosion at Otedola Bridge at 2am ??? This is insane 😭 I thought the era of tank explosions are over !?? pic.twitter.com/zz9VXjJil2

KanyiDaily had also reported how a fatal accident occurred on Otedola Bridge around Berger Area of Lagos State, leaving one person dead and several others injured.