Mama Rainbow is wife of the late Nigerian playwright, Hubert Ogunde. She was born on 16 October 1942 and ventured into full-time acting after the death of her husband.

To celebrate the veteran actress, the OAP in an Instagram post on Friday narrated how Mama Rainbow picked her up from a primary school in England.

She wrote, “Happy birthday grandma @mamarainbowofficial I remember when you picked me up from primary school in England and I told everyone a superstar was coming,” Stephanie wrote.

“They were all so excited to meet a movie star! May God continue to bless you, love you loads. 78 never looked this good.”

The Nigerian on-air personality and presenter for MTV Base Africa and Ebony Life TV became known after featuring in the popular Nigerian TV Series Tinsel as ‘Feke.’ 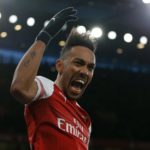