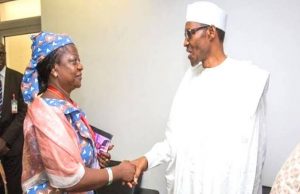 It will be recalled that following Onchie’s recommendation for appointment as the INEC commissioner representing Delta State, there have been calls for her nomination to be dropped based on the fact that she’s a card-carrying member of the APC.

The Peoples Democratic Party (PDP), Nigeria’s main opposition party also joined its voice to that of others calling for Onochie’s nomination to be rejected.

However, the APC in a statement on Friday, signed by its Deputy National Publicity Secretary, Yekini Nabena said the calls by PDP and some others were hypocritical.

The statement alleged and identified some INEC commissioners as members of the PDP, and therefore submitted that Onochie’s party membership shouldn’t be an issue but her job competence which is not in doubt.

“Perhaps the PDP needs to be reminded that one of its card-carrying members, Dr. Johnson Alalibo is the current Edo State Resident Electoral Commissioner (REC). Alalibo who was also a former Deputy Whip in the Bayelsa State House of Assembly has been an electoral asset to the PDP but that is an issue to be addressed another day.”

“We urge the patriotic 9th Senate to stick with the facts and issues by ignoring the PDP’s grandstanding, cheap blackmail, baseless and subjective allegations of partisanship it is sponsoring against Ms Onochie. For the PDP, Ms Onochie’s capacity and effectiveness as a public servant and senior social media profesional amounts to partisanship.”

“We equally invite the PDP to query the ‘unquestionable integrity’ of brazen PDP apologists such as Festus Okoye, National Commissioner and Chairman, Information and Voter Education Committee of INEC; Mike Igini, Resident Electoral Commissioner (REC) for Akwa Ibom State, among others.”

“We challenge the PDP to point to any of its defunct 16-year administrations that defended and guaranteed the Executive arm of government’s non-interference in INEC’s operation and the true independence of the electoral commission as President Buhari’s government has done.”

Keeping hatred in your heart makes you weak, Hania Aamir

2023: What I Said When Asked To Predict Next President – Pastor Adeboye

The renowned clergy who spoke during a sermon at the church’s National Headquarters, Ebute Meta, Lagos State. Pastor E.A.…

Sanwo-Olu Babajide Sanwo-Olu, the governor of Lagos state has been called out by a Niger Delta Activist, Comrade Israel…

I Have Never Done Runs In My Life – Relationship Therapist, Blessing Okoro (Video)

A city councilor in Wieliczka, Kamil Jastrzebski, has called the final results of the poll “a great deal of…