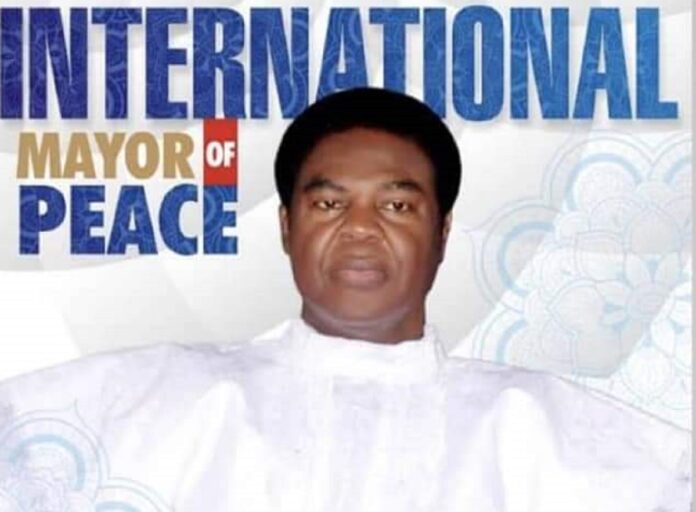 Founder/Leader of Living Christ Mission, LCM Incorporated and Proprietor/Chancellor of Hezekiah University, UNIHEZ, Umudi, Imo State, His Grace, Most Rev. Prof. Daddy Hezekiah has expressed sadness over what he termed backward integration of Nigeria occasioned by high level of corruption in all facets of our national life.

He attributed the downward trend the Nigerian nation is suffering at the moment to corruption, election rigging, lack of vision, nepotism, mediocrity, ethnic and religious sentiments and above all, lack of fear of God, among others, by the entire populace populace.

Hezekiah who spoke at his LCM Church Corporate Headquarters, Onitsha, Anambra state, shortly after he was decorated  with an International Mayor of Peace award, by a United Nations Department of Economic and Social Affairs known as International Association of World Peace Advocates, IAWPA, as part of activities marking this year’s International Day of Peace, called for a change of heart among the political leaders and the led.

He frowned that it was out of sheer corruption, greed and selfishness that threw Nigeria into a debt nation today, yet there is nothing good to show for our 60 years of independence, adding that even motorable roads, electricity, employment opportunities and industrialist establishment have all eluded us, to the extent that epileptic electricity supply with attendant high electricity tariff have become the order of the day, a situation which he said was instrumental to the current agitation for secession by a particular section of the country.

He therefore urged the authorities concerned to first of all, have fear of God, establish industries to  create employments, stop election rigging as beneficiaries do not owe any allegiance to the electorate, nip corruption in the bud and above all, provide infrastructural facilities to enable average Nigerians enjoy the dividend of democracy.

On the foreign scene, the cleric slammed world powers for what he identified as their persistent hostile polices against the State of Israel, adding that he was in total support of the United States President, Mr Donald Trump’s current polices on Israeli statehood.

According to him, “the State of Israel should be allowed to declare Jerusalem as their Original capital in line with the biblical history when King Cyrus assented to a decree for the place to be the capital of Israel”

Hezekiah who is the second person in Nigeria after Ex-President Goodluck Jonathan and eight personality in the world to be so honored by the organization, maintained that the state of Israel must be allowed to exist without interference, adding that most of these hostile policies are engineered by Israeli envious neighbors who are bent on annihilating the State of  Israel in the world map to discredit the Christian biblical history and thus create an impression that the bible is not a truthful book.

Earlier while bestowing the award to Prof. Hezekiah, His excellency Ambassador Per Stafsen, World Peace President from Denmark had described Hezekiah as a humble man of God and peacemaker who had used Christianity to effectively impact on humanity thereby promoting peace among nations.

Stafsen disclosed that the IAWPA monitored Prof. Hezekiah’s activities for so long and came to a conclusion that bestowing an international award of this magnitude on him would encourage and motivate him to do more to ensure peace in the world adding that by  this award he is now a world recognized peace ambassador.

Highlights of the occasion was the decoration of the recipient by the organization President as well as investitures of two of Professor Hezekiah daughters namely Princess Hezekiah Favor Chukwunazaekpere and Princess Divine-Gift Onyinyeomachukwu  as Eminent peace award winners and Dr Duru Hezekiah as UN-SDGS champion of the year with  other 12 eminent members of the church who were decorated as  peace Ambassadors.

In his remarks, the convention Committee Chairman, Prof Uriel Nwanolue eulogized the prelate who hails from Umulowe, Umugara village, Nkwerre Imo State and maintained that his fervent prayers with Psalm 91 could be attributable to the sustenance of all the members of LCM worldwide not to lose any single person to COVID 19 pandemic.

Nwanolue thanked God for using Daddy Hezekiah to distribute palliatives worth over N30 million to indigents from Igbo, Hausa and Yoruba extractions irrespective of their religious affiliations during the lockdown.