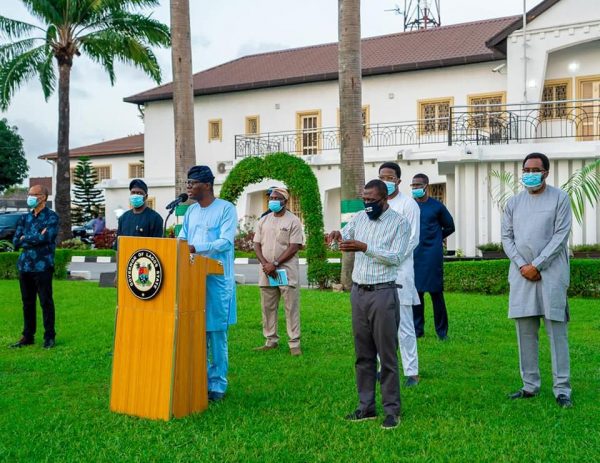 Sanwo-Olu at the press conference in Lagos today –> 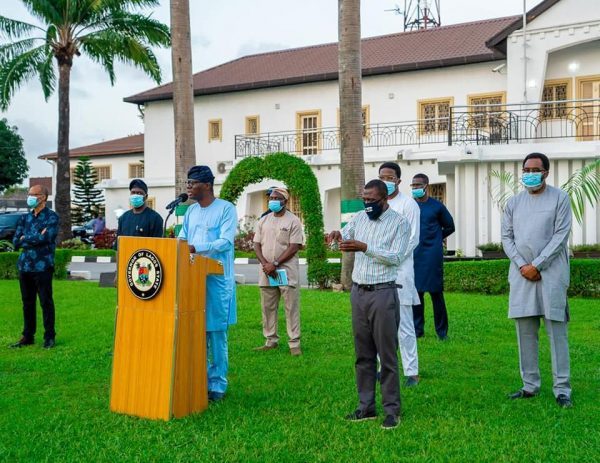 Sanwo-Olu at the press conference in Lagos today

Lagos State Governor Babajide Sanwo-Olu virtually met with most of the lingering demands of #EndSARS protesters by reeling out the concessions his government has made at a press conference on Thursday.

In compliance with a directive of the National Economic Council, Sanwo-Olu announced the establishment of a judicial panel to investigate SARS and police brutality and rights violations.

As demanded by the protesters, Sanwo-Olu also named the trigger happy policemen who killed a protester in Surulere on Tuesday. He said the men are already facing orderly room trial in Lagos.

He also said his government has set up a N200million Fund, to compensate victims of police brutality.

And he urged protesters to embrace peace and dialogue.

According to the governor, a seven-man Judicial Panel of Enquiry and Restitution has been set up to investigate cases of brutality and human rights violations committed by operatives of the dissolved Special Anti-Robbery Squad (SARS) in the State.

The move is part of the steps being taken by Lagos Government to address the five-point demands of the youth demonstrating against SARS brutality.
Sanwo-Olu made the announcement during a live address held at the State House, Marina.

The panel, which is being headed by retired Justice Doris Okuwobi, will sit for six months and is mandated to thoroughly investigate all verifiable claims of abuses and fatalities arising from SARS engagement in the State, with the objective to bring erring officers to justice and get compensation for the victims.

Human Rights Commission and protesters are also expected to nominate their representatives, before the panel commences sitting next week.

The Governor also set aside N200 million Trust Fund for the compensation of victims and families of those who died in the course of SARS’ activities.

The developments, Sanwo-Olu said, were part of the agreements reached at the Thursday meeting of the National Economic Council (NEC) presided over by the Vice President, Prof. Yemi Osinbajo, and which had all Governors in attendance.

The Governor said: “I attended a National Economic Council Sub-Committee Meeting in which the major focus was the ongoing EndSARS protests and the necessary steps to take to assuage the feelings of the protesters. In line with the five-point demands of the protesters, we unanimously decided to inaugurate a panel of investigation into human rights abuses.

“A seven-member Judicial Panel of Enquiry and Restitution for victims of SARS-related abuses in Lagos State is now being constituted. This panel will ensure that all those with verifiable cases of SARS brutality or fatality get justice and receive compensation. The panel will be chaired by retired Justice Doris Okuwobi.

The Governor said his Government frowned at police misconduct seriously and would continue to respect the rights of the citizens to demonstrate peacefully.

He condemned the violence that marred the EndSARS protest in Surulere on Monday.
Sanwo-Olu disclosed all the four erring police officers who fired live ammunition at peaceful protesters in Area C Police Command in Surulere had been identified and currently facing an orderly room trial that is being monitored by the Government.

He gave the names of the erring officers to include: Inspector Bagou Michael, Inspector Ekpoudom Etop, Sergeant Nnamdi Majura and Sergeant Akinyemi Benson.

While making reference to the Thursday skirmish at the protest ground in Alausa, the Governor sent strong warning to hoodlums who may want to harass the protesters to desist from the act. He stressed that the full wrath of the law would be brought on anyone apprehended for such act.

Sanwo-Olu, however, appealed to the protesters to acknowledge the progress being made on their demands and respond in good faith. He said the State had started to record incidents of breakdown of law and order as a result of the unabated protest.

He bemoaned the collateral impacts of the protest on the wellbeing of businesses and residents, pointing out that Lagos had recorded fatal medical evacuations as a result of blockage of key roads and gridlock occasioned by the protests.

He said: “We have been getting complaints from Lagosians who are unable to go to their workplaces or earn a legitimate living because of the collateral impact of protest gatherings.

“We cannot continue this way. What we need now, and ask for, is for the protesters to sheath their swords, and give us a chance, as Federal and State Governments, to consolidate on these actions being promptly taken to address their concerns.

““Even as we affirm the constitutional rights of all protesters to peacefully make their grievances known, it is also our duty as a government to ensure that the exercise of one set of rights by one group of people does not in any way constrain the rights of any other group of people.

” We now have no choice but to take every necessary step to restore law and order and to minimise the disruptions being experienced by all law-abiding residents of Lagos State.”

“The Governor reminded the protesters that Lagos had started to witness an increase in daily caseload of Coronavirus (COVID-19) in the last couple of days, stressing that the public demonstration could aggravate the health crisis that had been efficiently managed by the State Government”.