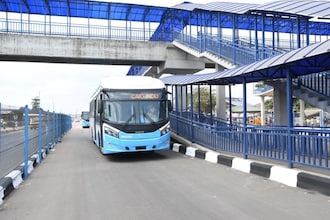 As #EndSARS protests continue across the country, Idowu Oguntona, the managing director of Lagos Bus Services Limited (LBSL) has suspended operations for all buses due to the safety of passengers.

In a report by Premium Times, this was disclosed in a statement by LBSL public affairs officer, Afolabi Olawale, adding that the suspension was until further notice.

The suspension of operations is coming after a video clip which has gone viral showed thugs who disrupted the #EndSARS protest coming out of a bus at Alausa axis on Thursday, October 15.

He explained that around 8 a.m a bus was heading to Oshodi from Berger when armed individuals at Secretariat highlighted from a yellow vehicle in front of the bus passengers scampered for safety due to the imminent danger.

While adding that that one of the passengers tried escaping through the bus’s rear window, Olawale noted that the armed group later went their way without attacking the bus.

The LBSL public affairs officer added that no bus belonging to the company was used to commute people to disrupt the ongoing protests in the state. 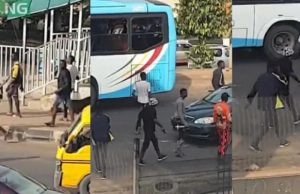 In a related development, at least two people were feared dead, while many others injured after a Sports Utility Vehicle (SUV) ran into a crowd of #EndSARS protesters at Alagbado axis of Lagos state.

In a video clip that has gone viral, some youths were spotted carrying two bodies while a volunteer of medical corps was deployed to take care of the wounded around Amikanle area.