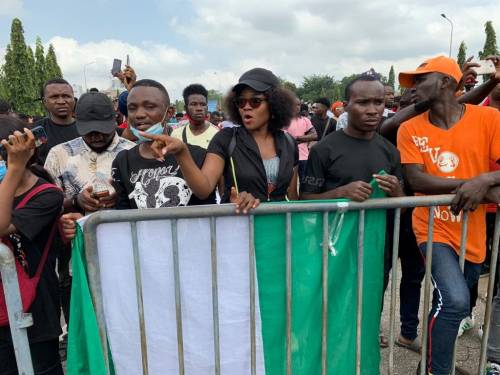 Nigerian youths have expressed disappointment at lawmakers on Thursday over their inability to allow them see Senate President Ahmed Lawan.

According to Sahara Reporters, angry Nigerians protesting police brutality chased away some lawmakers, who had come to address them and insisted on seeing the Senate President, Ahmed Lawan, instead.

The protesters, succeeded in gaining entry into the main gate of the complex, booed and asked the lawmakers to go back.

All efforts to pacify and calm the crowd proved abortive.

Armed policemen at the gate of the complex had a hectic time controlling the protesters, who vowed not to leave the premises.

Meanwhile, the Minister of Federal Capital Territory, Muhammed Bello, has announced a ban on all protesters in Abuja.

He said the activities of the protesters had endangered lives of citizens going about their legitimate businesses.