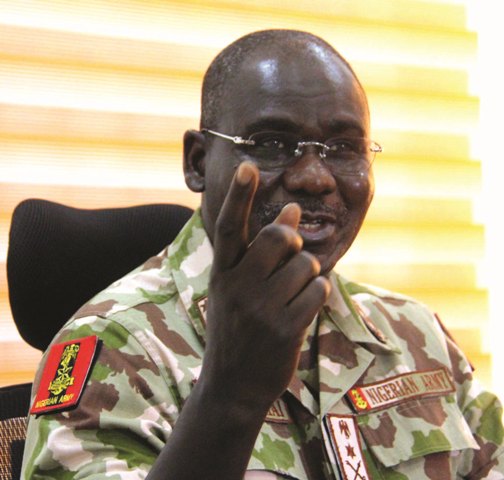 Lieutenant-General-Tukur-Yusuf-Buratai and army under fire –> 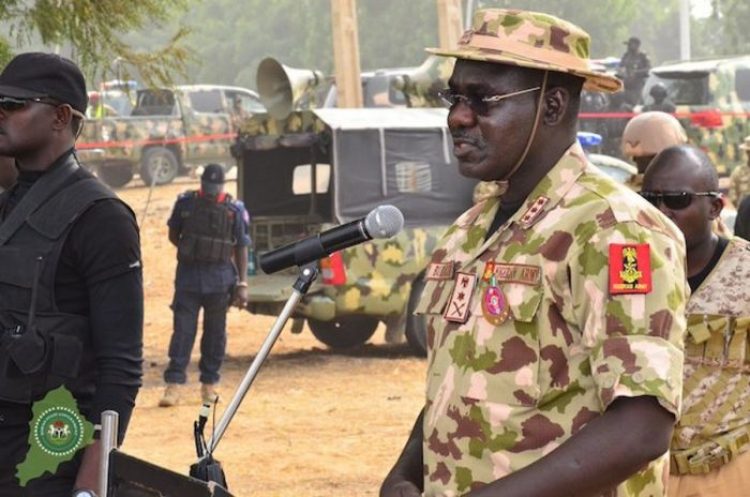 A torrent of attacks on the Nigerian Army has been triggered by its statement warning #EndSARS protesters in the country.

Most commenters wondered why the army should read the riot act to peaceful protesters when it has failed to defeat the menace of Boko Haram in the North East.

The army early on Thursday warned those it called subversive elements and trouble makers to desist from such acts as it remains highly committed to defend the country and her democracy at all cost.

Colonel Sagir Musa, the spokesman said the army is committed to the sustenance of peace, security and defence of democracy.

“The Nigerian Army (NA) wishes to reassure law-abiding citizens that it is highly committed to the sustenance of peace, security and defence of democracy in Nigeria.

“As a responsible and law-abiding organisation, the NA reaffirms its unalloyed loyalty and commitment to the President, Commander in Chief of the Armed Forces of the Federal Republic of Nigeria President Muhammadu Buhari and the Constitution of the Country.

“All officers and men are directed never to be distracted by anti-democratic forces and agents of disunity”.

However, the statement incensed pro #EndSARS protesters, with the army derided for its inadequacies in containing the real security breaches in the country.

Chief of Army Staff, Lt. General Tukur Buratai was trending on Nigerian Twitter on Thursday as the attacks mounted in the social media.

Some of the comments:

#ENDSWAT Nigerian Army has no business supporting despots, this statement is highly irresponsible, inappropriate and provocative. The Army should be loyal to its employer-the Nigerian people! Stop using the @HQNigerianArmy to intimidate Nigerians, it won’t work! #RevolutionNow pic.twitter.com/w01WAuLmiH

After soldiers seized @ARISEtv cameras on Tuesday & threatened to shoot a journalist with @thecableng on Wednesday, that press statement by the Nigerian Army is every bit distasteful.

The Police CANNOT stop us.

You also CANNOT stop us.

You are called Nigerian Army for a purpose and not Buhari’s Army.

You have no constitutional right to disrupt peaceful protesters agitating for a better Nigeria.

Nigerian Army is supposed to handle terrorist issues in the country. We are not terrorists, we are citizens who are also peaceful protesters.

Nigerian Army being involved in this is a pure definition of misplaced priorities. #EndSWAT #StopPoliceBrutalityinNigeria

Reading through this press release by Nigerian Army. One tends to ask again, is Buhari the COMMANDER IN CHIEF of Military armed forces or…….??
This is hilarious and unlawful. #EndSWAT #EndSARS #EndBadGovernanceinNIGERIA pic.twitter.com/AOjqv4XAPH

If the youths can leave their comfortable bed to come sleep out like this, shows we ain’t joking @MBuhari. The Nigerian Army cannot scare us, you will only worsen the wound you already have. START WORKING WE NEED TO SEE RESULT. #EndSWAT pic.twitter.com/KHokzEjDFi

Tell our Nigerian Army that we the Nigerian youths of 2020 don’t respond well to threats against our civil liberties.

We are not our parents.

The Malian Army protected the citizens.

The Nigerian army is threatening the citizens. Shame.

If you @HQNigerianArmy take the side of the government, you would share their fate.

God is involved in this matter. https://t.co/I6DNo6DLWU

Lol Nigerian Army have not finished dealing with Boko Haram and Fulani Herdsmen, them see peaceful protesters their prick dey charge. Alaye if you don’t sit down somewhere. #EndPoliceBrutalityinNigeria

Who is the Nigerian Army warning with this statement? What does this even mean? pic.twitter.com/BKmYBCAaRc