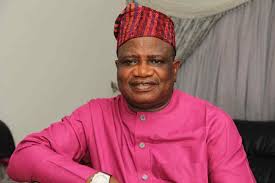 Outrage As House of Reps Member Dumps APM for APC

The Allied Peoples Movement has lost its member in the House of Representatives after he defected to the All Progressives Congress.

Mr Kolawole Lawal, on Tuesday, announced his return to the All Progressives Congress from the Allied Peoples Movement, sparking outrage inside the house.

Two members of the House had last week dumped the Peoples Democratic Party for the APC.

The Speaker of the House, Femi Gbajabiamila, at the plenary on Tuesday, said, “I have an announcement that pleases me; I believe it will please all of you – APC, PDP, no matter what party you are. It is from Hon Kolawole Lawal. Change of party.”

Gbajabiamila read a letter from Lawal formally informing the chamber about his defection.

Lawal, in the letter, recalled how he joined others to exit the APC in Ogun State ahead of the 2019 general elections to join the APM.

The Ogun State chapter of the APC had been polarised, with the then Governor Ibikunle Amosun leading a faction while a former governor, Chief Olusegun Osoba, leading the other.

The Amosun-led faction had pulled out of the APC to contest elections on the platform of the APM. Candidates of the APM had lost at the polls except for Lawal.

After Gbajabiamila read the letter, the Deputy Minority Leader, Toby Okechukwu, raised a point of order to fault Lawal’s defection as breaching the Constitution, by defecting from a party on whose platform he was elected where there was no division within the party.

The Speaker, however, interjected Okechukwu to dismiss his argument, saying “Are you raising the same argument as you did last week? Okay. Noted. Your point is noted. It is the same thing as last week.” He hit the gavel.

Another ranking PDP member, Nicholas Ossai, also raised a point of order to cite Section 68(2) of the Constitution.

The Speaker also interjected Ossai, saying, “That constitutional point of order was raised last week. It was about to be raised by Hon Toby. And it was raised by my good self four years ago. So, we have noted your point of order.”

The Minority Leader, Ndudi Elumelu; Deputy Minority Leader, Toby Okechukwu; and leader of the PDP caucus, Kingsley Chinda, had separately raised constitutional points of order, asking Gbajabiamila to declare their seats vacant as there was no crisis in the PDP chapters in the defectors’ respective states.

The Speaker had, however, described leaders of the opposition as hypocrites, recalling that as Minority Leader in the previous Assemblies he also protested against defections to the PDP but his arguments were dismissed.

Gbajabiamila noted that the PDP failed to lay the foundation of sanctioning illegal defections while in power.

He had said, “Most of those who spoke were all here; what you have said, when I was Minority Leader and we had people cross over from our party to your party, I said what you on this floor; I even said 100 times more, I quoted laws and cases, but you shut me down.

Gbajabiamila had added, “Like you also told me in those days when I was Minority Leader, your points are noted. Any more defections?”