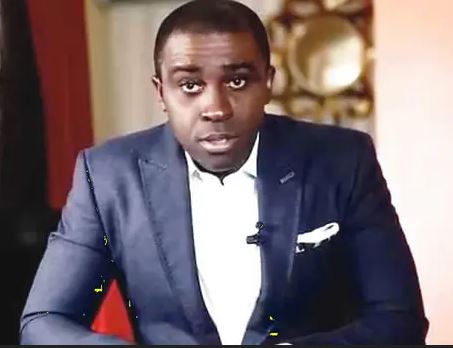 According to Frank, if the President feels the youths are too small to be addressed, then the IGP is also too small for the youths to believe when he said SARS has been dissolved.

Popular Tv host, Frank Edoho has laid curses on officials of the Special Anti-Robbery Squad while stating why the #EndSARS protest must contine.

In his Twiiter post, Edoho explained that if the President of Nigeria feels the youths are too small to be addressed, then the IGP is also too small for the youths to believe when he said SARS has been dissolved.

”If the President of the Federal Republic of Nigeria feels we are too small for him to address, then the IGP is too small for us to believe that SARS has been dissolved!

Until then, #EndPoliceBrutalityinNigeria #EndSarsNow #ENDSARS CONTINUES!!!!!!!!!!!”

In another tweet, he rained curses on SARS officials saying just like their victims, they will not also see help when they cry out for help.

”God will punish SARS for all the killings, extortions, violence, carnage and abductions. They will call for help and like their victims, no one will come to their aid. They will shout their voices hoarse in anguish but all they will hear is the laughter of their victims. AMEN!”, his tweet read.