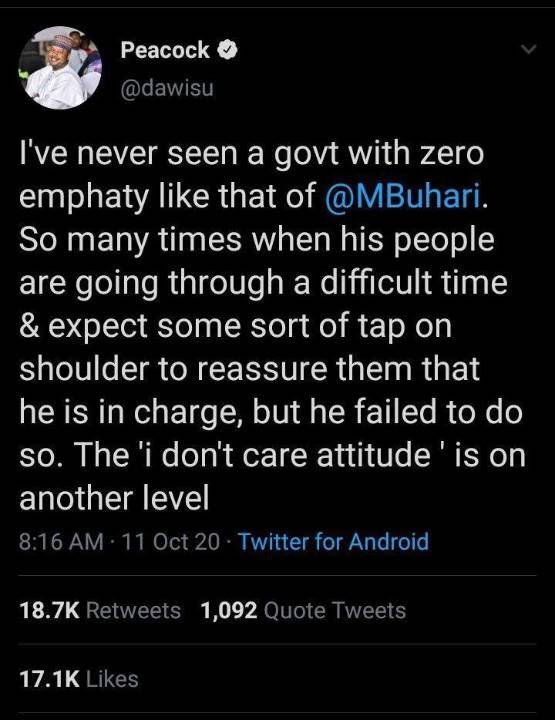 Following the sack of Tanko Yakassai (@dawisu), an aide to Governor Abdullahi Ganduje of Kano State, reactions and support have continued to pour in for him

In a tweet yesterday, the ex-governor’s aide had expressed his displeasure about the “i don’t care attitude” of the president to the plight of Nigerians who have been protesting an end to the Special Anti-Robbery Squad (SARS).

A directive from the Governor confirming his suspension was conveyed by the commissioner for information in the state, not long after news of his tweet criticizing the president Buhari went viral.

However, some Nigerians have been showing support for the suspended aide with the hashtag #IstandWithDawisu thread.

@GoldmyneTV: “We have to show our total support for our brother Dawisu, he was suspended for telling the truths something Bashir Ahmad could never do. #IstandWithDawisu”

@gbemitoyin: “Time for the youth to form a political party, choose our candidates and start strategizing for the next election #IStandWithDawisu #EndSARS #lekki”

@Yusuf_A_J: “#IStandWithDawisuDawisu has seen it all with Ganduje, he stood by this man through the dollar-saga, when everyone faulted Ganguje for dethroning SLS, he stood by him. When the people of Kano felt misrepresented, Dawisu defended his boss.

“#IStandWithDawisuToday, he’s been suspended for tweeting his ‘own opinion’ on #SARSMUSTEND. These people are too quick to forget. They forget how we endured long standing hours in the sun to vote them into office. They forget everything except their personal interest.

“Lets remind them of our #5for5 demand. Lets remind Buhari that we’re not lazy, Lets demand more from the Minister of Police Affairs. May our #prayerwalk never b in vain.”