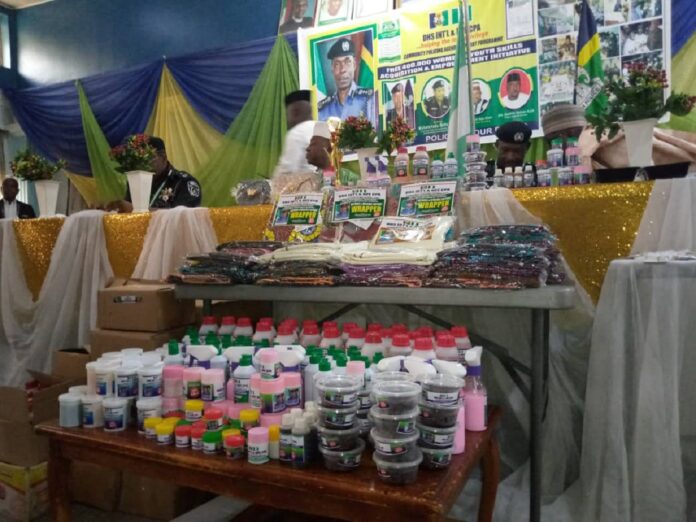 According to DCP S/C, Muhammad Bello Dalha, Commandant of Kano Police Command Special Constabulary who doubles as the National Project Coordinator of the Empowerment programme, about 400, 000 people are billed to benefit nation-wide.

In said in Kano, 500 trainers would be trained, adding that, “250 trainers have already been trained, while another 250 will soon receive their training to train the 25,000 Youths and women  in different skills, after which facilities will be provided for them for economic empowerment.”

According to him, “the programme is under the Inspector General of Police security strategy and initiative to assist Nigerian masses under the Community Policing Agenda that bring the general public close to the Nigeria Police Force.”

He added that the participants were trained  on how to make wrappers, shampoos, soap, air fresheners, ear rings, hair and body creams, hand bags, among other trades.

The beneficiaries and their trainers were presented with Certificates by the Commissioner of Police, Habu Sani, at the Officers Mess, Bompai.

Sani said the gesture is a security strategy by the Inspector General of Police (IGP) Mohammed Abubakar Adamu, aimed at curbing criminal activities in the land and at the same time empowering the underprivileged people in the society.

“Apart from arrests and detentions, the police in Kano has adopted the carrot approach of training and rewarding idle youths. An idle mind, they said, is a workshop for the devil. So, our youths need to be doing something.

“This strategy has to do with community police engagement, which led to the establishment of special constabulary. The approach allows the people and police to be friendly so that the community looks at areas of concern and give useful information to us to improve on what we are doing.

“Kano is the most peaceful State in the north, because of the cooperation between the police and the people of Kano.

“For harden criminals, we make use of investigation with technology to crackdown on them. We also launched campaign against drug abuse and other vices in the state. So, we are applying the stick and carrot approach.

“And the training and empowerment programme is free. It extends to even criminals who are willing to surrender arms and turn over a new leaf,” he stated.

According to him, police collaborated with NGOs and the government before embarking on the programme, which he said the beneficiaries now have skills to be self-reliant.

“With time, those who excel will be supported with soft loans to bankroll their trades. This will reduce idleness, thuggery, crime and dependency in Kano state,” he added.