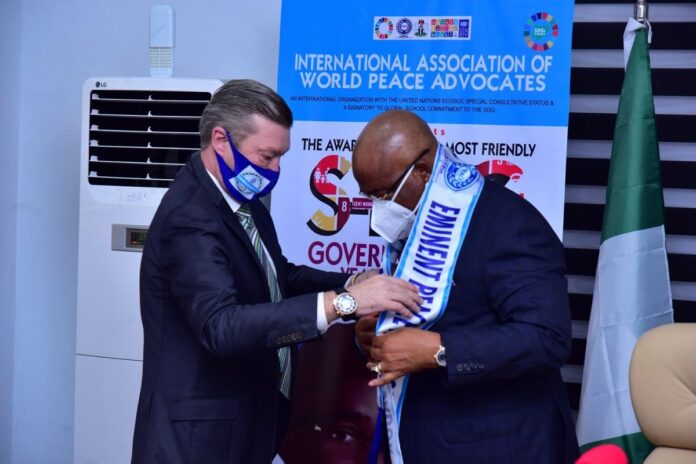 …Decorated as an eminent peace ambassador

Governor of Imo State, Senator Hope Uzodimma has been named the 2020 Sustainable Development Goal (SDG) Most Friendly Governor in Nigeria by the International Association of World Peace Advocates (IAWPA).

The group has also decorated the Governor as an Eminent Peace Ambassador based on his pursuit of peace in his leadership style in Imo State and beyond.

The ceremony which took place at the Government House Owerri at the weekend was conducted by the IAWPA President, Ambassador PerStafsen accompanied by other top members of the association.

In an address he read while decorating the governor, Stafsen described Governor Uzodimma as not just a politician who has uncommon interest in quality leadership, but one passionately inclined to meeting the SDG needs of his people.

He said that the governor is not tribal or ethnic in his style of administration which makes him a true nationalist.

“He is carrying everyone along and leaving no one behind, irrespective of class, age, colour, and religion. Hence the social inclusion in his administration covers the five “Ps” of the SDGs meaning People, Planet, Peace, Property and Partnership,” Stafsen said.

The Association President therefore used the occasion to call on the United Nations (UN), African Union (AU), Economic Commission for West African States (ECOWAS), the New Partnership for Africa Development (NEPAD) and the entire International Community to visit and invest in Imo State.

He assured potential investors all over the world that any investment in Imo State will certainly meet the needs of the people as “the Governor represents a true man of trust and public confidence that will rewrite the Nigeria history.”

He promised on behalf his Association to partner with Imo State government to further every sustainable development initiative of the government by ensuring that “they put in place SDG Tracking Mechanism that will promote peace, development and good governance in Imo State.”

Accepting the honour done him by the IAWPA Advocates, Governor Uzodimma thanked the group for finding him worthy for the award among the 36 Governors in the country and reiterated his administration’s commitment to good governance and support of the 17 programmes of the SDGs. The Governor emphasized that the gains derivable from the activities of SDGs will be used to assist the poor and the vulnerable in the society.

Governor Uzodimma however urged the United Nations and other world bodies involved in the SDGs programmes to do everything possible to sustain the programme, noting that “Africa needs it most considering the level of poverty, disease, and declining educational standards plaguing the continent.”

He once more expressed his gratitude to the group and assured them of his continued support, including his willingness to host the 2021 session of the IAWPA in Imo State.

Highlight of the ceremony was the decoration of the Governor by the President of the association Mr. Stafsen.